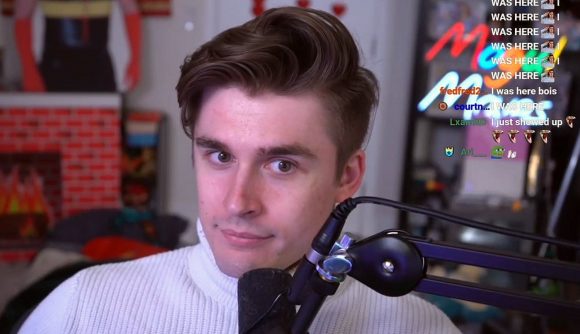 Ludwig ‘Ludwig’ Ahgren recently completed a mammoth achievement on Twitch, by streaming continuously for an entire month. During his now famous Subathon stream, every new subscriber added 20 seconds to a timer that dictated how long the stream would continue for. Days into the stream, he reduced this to ten seconds per sub, and eventually he had to cap the stream at a month.

The success of the subathon saw Ludwig break the record for the most concurrent Twitch subscribers, which was previously held by Tyler ‘Ninja’ Blevins. Ludwig cemented himself as one of the biggest streamers in the world, but many fans were worried that he didn’t get a chance to spend any quality time with his girlfriend and fellow streamer, ‘QTCinderella’, as he was nearly always on stream.

However, Ludwig reveals that he did manage to sneak some alone time with his girlfriend when he was briefly off-screen. He revealed some stream secrets on the live edition of the CouRage and Nadeshot Show podcast, recorded at the 100 Thieves compound in honour of the $350,000 CashApp ‘Pay Day’ Uno tournament, which was streamed live on Twitch.

When hosts Jack ‘CouRage’ Dunlop and Matthew ‘Nadeshot’ Haag ask him about maintaining relationships, Ludwig spills the beans. “Most people have needs,” Nadeshot asks. “How is that managed, the intimacy?”

Ludwig alluded to the fact that he may have spent some time with his girlfriend in those off-camera moments. “We’ll not get into the nitty-gritty of it,” he tells Nadeshot. “But everyone’s talking about how I had no time to myself. I would throw up video for like an hour and I would go shower – I had alone time. The stream was running, but it was fine.”

These hour-long breaks allowed him to wash himself, as well as spend some time with his own thoughts. They also gave him the chance to spend a little time with his girlfriend, too. You can watch the clip here, at around the 31-minute mark of the stream:

However, ever the eco-conscious streamer, Ludwig made sure that CouRage knew it would only take him “max five minutes” – to shower, of course.

Despite the fact that he is set to take home an estimated quarter of a million dollars thanks to the subathon, this efficient showering technique means that Ludwig probably saved a lot on his water bills over the course of the month-long stream.