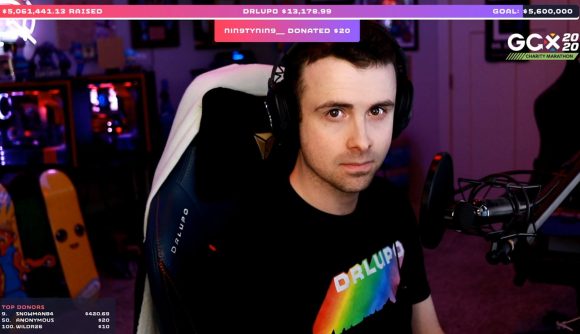 For years now, Ben ‘DrLupo’ Lupo has championed charity streams on Twitch. He’s supported a number of causes over the years, but fans of his will know there’s one close to his heart – St Jude Children’s Research Hospital. Yesterday, the 33-year-old took part in a streaming marathon for GCX, a Florida-based gaming event, raising a phenomenal £965,683.09 in just seven hours.

Over the course of the stream, DrLupo played a number of games from Fortnite to Escape From Tarkov. Since most of his donation goals were met, his wife, Samantha, played a few games of Battlestate Game’s hardcore shooter, and his son, Charlie, treated viewers to some Minecraft: Dungeons gameplay.

Thanks to the generosity of his viewers – and his son, who donated his pocket money – DrLupo helped GCX reach their $6 million donation goal just seven days. Other streamers like Ben ‘CohhCarnage’ Cohh, Anthony Kongphan, and AnneMunition have all taken part in the streaming marathon over the last week to raise money for such a good cause and prove that gaming really does do good.

“Chat, I think this goes without saying, from the bottom of my heart, from every single person at St Jude, from everybody that’s part of the GCX charity marathon across Twitch, Facebook, and Mixer, we love you to death,” DrLupo at the end of his stream. “Thank you, thank you, thank you.”

Last year, DrLupo raised $3.2 million for the hospital over a number of events. With the way he’s going already, he might well exceed that amount in 2020.