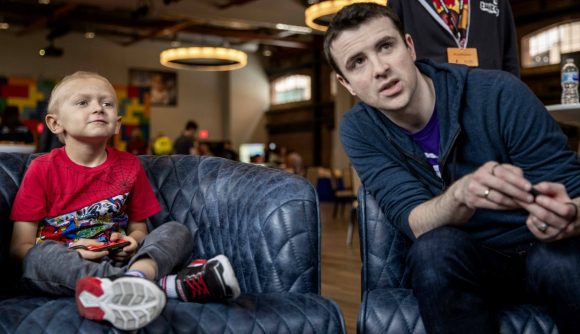 Well known for his charity work and support of St Jude’s, DrLupo’s solid day of Fortnite grinding saw thousands of donations pour in, including a massive $1 million donation from Twitch themselves, who earlier this month secured a new deal with the streamer to keep him on their platform. Along with large donations from fellow streamers like Tyler ‘Ninja’ Blevins and AdmiralBahroo, the stream raised a grand total of $2,339,943.53 for the children’s hospital, which is roughly enough for an entire day of life-saving operations and treatments. Earlier this year, DrLupo also raised $920,000 for the hospital during Guardian Con, meaning he’s raised well over $3.2 million during 2019.

An emotional and astounded DrLupo received Twitch’s cheque for $1 million dollars for the charity right at the end of his stream. “Bro, are you kidding me?” he says as he unwraps the cheque. “Are ya’ll for real?”

The importance of the charity to DrLupo was evident throughout the stream and there were numerous emotional moments whenever a big milestone was hit or a large donation was made.

On singing his new deal with Twitch earlier this year, DrLupo said in his announcement video that one of the main reasons was that he would be “most effective” at continuing and growing his charity work on the platform.

The stream averaged almost 29,000 viewers and achieved a peak audience of over 50,000 people.