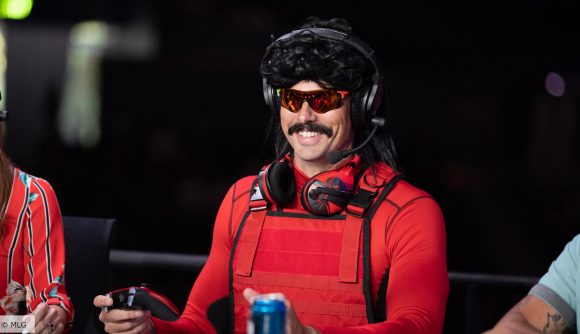 One of the world’s most recognisable livestreamers, Guy ‘Dr DisRespect’ Beahm, has signed a new exclusivity deal with Twitch that will see him stay at the platform where he made a name for himself for the next two years.

After teasing that a big announcement was on the way, The Doc finally put the rumours that he was moving to another streaming platform to rest. Currently Twitch’s sixth most followed active streamer with over 4 million followers, Dr DisRespect is one of the platform’s most valuable assets and has in the last few months been making more and more non-endemic cameos that increase both his and Twitch’s exposure, the most recent being his partnership with the WWE and his storyline with iconic wrestler, The Undertaker.

In his rather elaborate announcement video, The Two-Time can be seen recounting the story of his success surrounded by laughing military personnel. He then bursts out of the plane, wing-suiting his way down – battle royale-style – into a city sporting the neon-lit logo of Twitch above it.

Streaming to billions around the world, only on @Twitch pic.twitter.com/nwfsjDJCWj

The Verge reports that the exact amount of Dr DisRespect’s two year deal with Twitch hasn’t been disclosed, but that it’s “a lot” of money.

After losing a swathe of top talent in 2019 to rival platforms – such as Michael ‘Shroud’ Grzesiek and Tyler ‘Ninja’ Blevins – Twitch has upped its game by offering similar exclusivity deals to its existing streamers to keep them where they are. The likes of Tim ‘TimTheTatman’ Betar and, most recently, Imane ‘Pokimane’ Anys, have now been secured for the foreseeable future with new contracts.

Dr DisRespect’s choice to remain on Twitch is certainly the least surprising outcome of this announcement, with the streamer previously stating that it was the best place for building strong communities and condemning the likes of Mixer for its strategy of “buying viewership.”