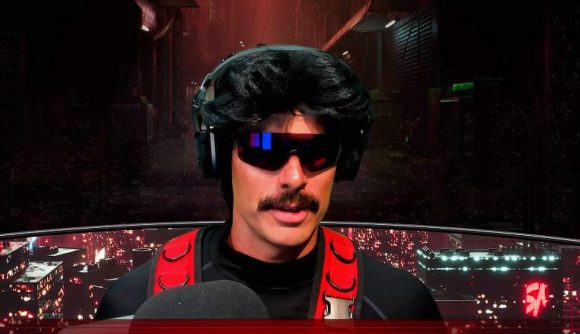 Dr DisRespect has made several posts using the hashtag #RoguePartner, and even played the Rogue Company in his first stream since his Twitch ban. With his own map in the game, expect to see more streams of Rogue Company in the future.

Dr DisRespect has lots of prior experience in level design, having designed several maps for Call of Duty: Advanced Warfare, such as Solar, Horizon, Ascend, Recovery, Sideshow, Site 244, and Quarantine. However, The Arena takes a much more stripped back approach. It’s closer to something like a minimalist take on Gears Of War’s Reclaimed map.

If you grab your tinfoil hat, there could be an easy answer as to why this map is less cluttered and busy. Rotate it 90 degrees clockwise, squint a little, and it looks like the outline of Dr DisRespect’s logo. The moustache has been flattened and straightened so it sticks out, but the basic shape appears to be there. Check it out for yourself below:

Hey @RogueCompany, I introduce…. The Arena.

It seems like the map will be live in a week, but in all honesty it is difficult to keep up with the messaging. The reveal, both of Dr DisRespect’s involvement and of the map’s design, occurred through a series of back and forth Tweets between Rogue Company and Doc himself, with a clearly scripted conversation designed to brew up intrigue.

So when Doc asked for the opportunity to design yesterday and was given 24 hours, it’s much more likely that the collaboration had long been going on behind the scenes. This time around, Dr DisRespect says “I’ll have it boxed out in a week,” but is that the actual release date, or just more of the same marketing conversation? We’ll just have to wait and see.