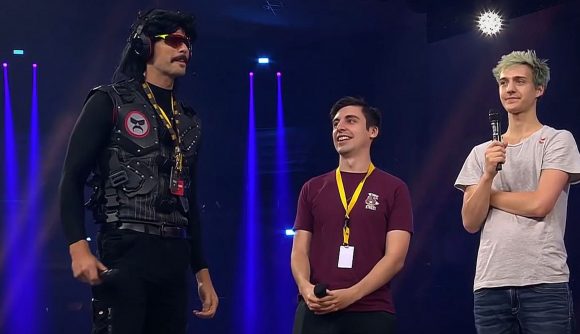 Popular Twitch streamer Guy ‘Dr DisRespect’ Beahm has taken yet another pop at rival streaming platform Mixer, saying that “you can’t buy viewership” in reference to the company luring two of Twitch’s biggest personalities to their site.

Dr DisRespect has already made his feelings known about Mixer in the wake of fellow battle royale streamer Michael ‘Shroud’ Grzesiek moving to Microsoft’s streaming platform last week. However, when asked again about Mixer in his October 28 livestream, the Doc got fired up all over again, criticising the strategy of poaching Twitch’s top talent. After reiterating that he would “never move to Mixer,” he highlights how many viewers were on the site compared to Twitch and asserts that getting Shroud and Tyler ‘Ninja’ Blevins on board won’t work because “you can’t pay for community, you can’t buy viewership.”

“You’re telling me: ‘Yeah, they [Mixer] are making big moves.’ No they’re not,” the Doc tells his stream. “Like, I have double the amount of viewers that Ninja has right now and I’m still in my intro. Reality check. These moves aren’t doing anything for the platform.”

After cutting to an ad and calming down after his short rant, the Doc also suggests that he was in fact paid more by Twitch to remain on the platform than Mixer paid Ninja and Shroud to leave. However, this claim has no evidence to support it and should be taken with a pinch of salt.

“Imagine getting paid more than the other guys [Ninja and Shroud] to stay. Imagine that…Imagine if that was something, huh?” he says.

The Doc, who at the time of writing is the most subbed-to streamer on Twitch with over 30,000 subscribers, has certainly made his feelings about Mixer known over the last few days and appears to be firmly loyal to Twitch.

Speculation has been rife since Shroud’s announcement on October 24 over which big name streamer could be lured to Mixer next. From what the Doc has been saying, it looks as if it’s not going to be him.