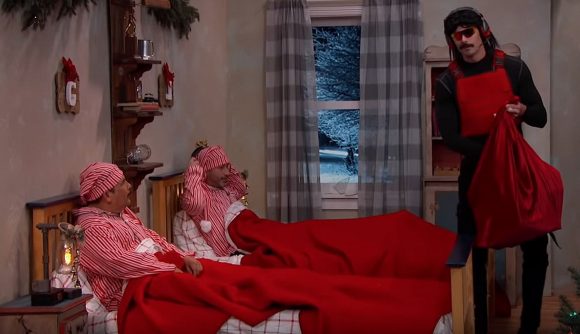 We’ve seen Guy ‘Dr DisRespect’ Beahm appear in some pretty bizarre ads before, but this one might just be the pick of the bunch.

That’s because the Two-Time Champion just starred in a featured advert on one of America’s biggest talk shows, Jimmy Kimmel Live, alongside Kimmel and his trusty bodyguard Guillermo. The ad, which was for one of the Doc’s main sponsors in gaming headset brand Turtle Beach, sees Kimmel and Guillermo tucking in to bed on the night before Christmas, only to be awoken by the sound of someone delivering presents. But rather than a traditional red coat, this particular Santa was wearing a red combat vest instead.

“Wait a minute,” says Kimmel, with – erm, lots – of enthusiasm. “That’s two-time streamer of the year Dr DisRespect.” An awkward exchange about moustaches and Santa ensues that results in Kimmel and Guillermo admitting they are scared of the actual Santa Claus.

It acts as a perfect set up for the killer product placement. “The only thing you should fear,” declares Dr DisRespect, “is sub-par gaming equipment. Which is why I’m flying around the world, upgrading good little gamers to these Turtle Beach headsets.”

He goes on to say that the headsets are perfect for both “pro gamers or little baby precious noobs,” as he hands pairs of headsets to Kimmel and Guillermo.

The Doc had earlier teased his appearance on Jimmy Kimmel Live, apologising for missing The Game Awards that evening because he had “some deliveries to make.”

This resulted in fellow Twitch streamer Tim ‘TimTheTatman’ Betar to ask: “What did you get me for Christmas, Doc?”

As bizarre as the ad is, it’s yet another example of how personalities from gaming, streaming, and esports are being featured more and more in traditional media.

Dr DisRespect recently signed a deal with the production company behind hit shows like The Walking Dead to make a comedy television series about how he became the star he is today.