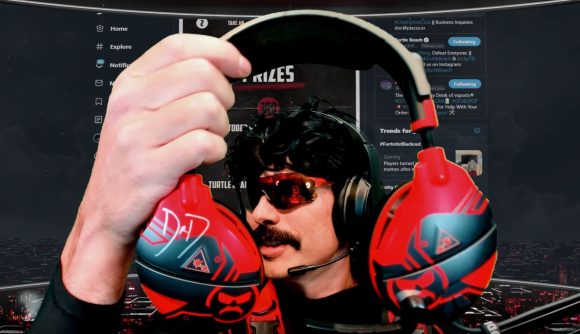 Guy ‘Dr DisRespect’ Beahm has announced a Halloween-inspired competition in which fans can win a signed set of Turtle Beach headphones and Dr D-style military vest. However, his Twitch chat were more interested in roasting the Doc for the appearance of his autograph.

The signature on the headphones and vest, which is meant to read ‘Dr D’, appeared to more closely resemble the word ‘Dad’, leading to the word being repeatedly spammed in chat. “It doesn’t say ‘Dad’,” Dr DisRespect insisted. “It says ‘D-R-D’, it doesn’t say ‘Dad’. I’m not your Dad, OK?” An increasingly irritated Doc continues to tell his viewers he writes it out as ‘Dr D’ because signing everything as ‘Dr DisRespect’ takes too long.

The competition, which has been dubbed ‘Doctober’ by the popular streamer, encourages fans to make and wear the best Dr DisRespect-themed Halloween costume possible and send in submissions for a chance to win prizes, including the signed items.

This isn’t the first instance where the Doc has had a misunderstanding involving one of his many nicknames. After showing off a drinks shaker from one of his merchandise lines that had ‘The Doc’ written on it, he realised that his face cam was mirroring the writing to closely resemble the words ‘dog s***’.

Whatever you believe his autograph reads, the prospect of winning some signed gear will be enough to get fans excited and create some cool Doc-inspired costumes.