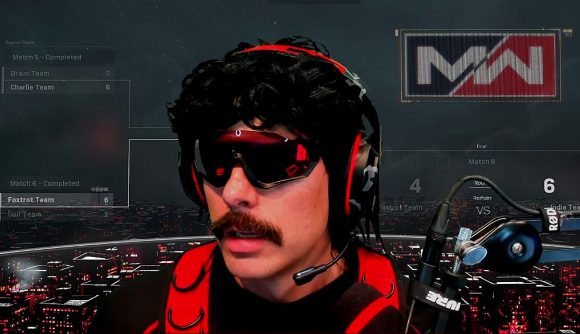 Guy ‘Dr DisRespect’ Beahm is well-practised in pointing out the flaws of the games he plays on stream. But during his latest Triple Threat Challenge, it was Call of Duty: Modern Warfare that came under fire for its “god awful” aim assist for console players.

After reaching the final of a Gunfight tournament that would’ve seen him complete his Triple Threat Challenge, The Doc falls at the final hurdle after tagging up his opponent several times with a pistol, only to be turned on and eliminated in a split second. The frustrating defeat sees the Twitch star slam his fists angrily on the desk and scream: “Fuck this fucking game! Fucking game blows!” before walking off camera.

On returning, the 2019 Esports Awards Streamer of the Year blamed controller aim assist for losing the gunfight before going into his game settings to turn off the crossplay feature that pits console and PC players together.

“Fucking unbelievable, man,” Dr DisRespect says after cooling off slightly from his rage. “Unbelievable. How do I take it off their shit crossplay, get me off of it… It’s god awful, man. Aim assist is way too strong.”

This latest rage while trying to complete one of The Two-Time’s famous Triple Threat Challenges comes only a week after the last, which saw him uninstall Apex Legends after complaining about audio.

The Doc always has some kind of excuse lined up for being outplayed during his streams, despite the streamer beginning work on his memoirs which document him becoming “the greatest gamer in the universe.”