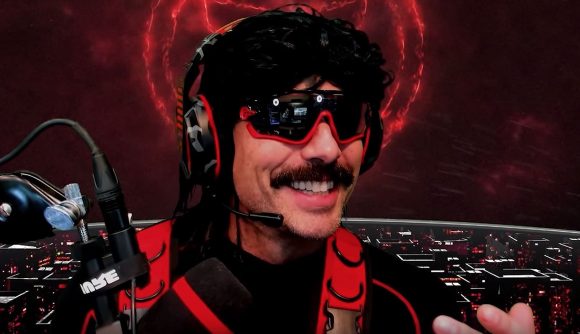 Twitch star Guy ‘Dr DisRespect’ Beahm has surpassed yet another milestone on the streaming platform after his channel hit 4 million followers.

The achievement means that The Doc’s channel is the ninth in Twitch history to hit the 4 million mark, and the eighth for an individual streamer. To mark the occasion The Two-Time tweeted out a picture of the ‘trophy’ he was sent by Twitch and, in typical fashion, ever so slightly exaggerated the numbers.

“We just hit 4 billion followers on Twitch,” he claims in the tweet. “They also sent us the trophy already… It’s made of rhodium and platinum, with a solid iridium base,” he adds, pointing out that his award is made from three of the most precious metals on earth. In his celebration stream, he claims he now keeps the trophy behind bulletproof glass. The Doc also jokes that if his tweet doesn’t get “250,000 likes” within an hour he will quit streaming and “sell The Arena.”

He also takes a sly dig at some of his competitors on Twitch after being told by a viewer that he is the “hardest working streamer on the platform.”

“Oh, I thought the hardest working streamer on the platform is just someone who streams for like 20 hours a day, isn’t that the norm?” The Doc says. “Or plays Fortnite, all day, every day? I thought that was – No?”

The next streamer in line to hit the four million follower mark is Imane ‘Pokimane’ Anys, who is currently sitting just shy of 3.9 million followers. Unless another big streamer has a sudden surge in popularity and follower count, it’s very likely that she will be the next to receive a platinum and rhodium trophy…