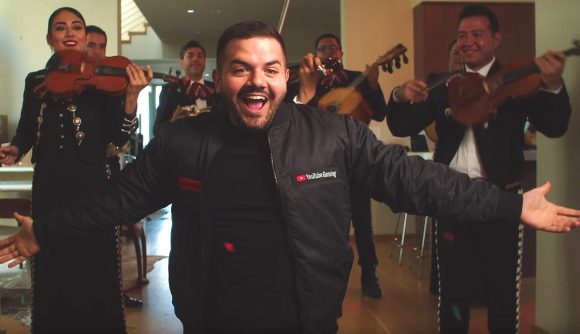 There have been many standout points in Jack ‘CouRage’ Dunlop’s streaming career. Whether it’s hitting 2 million followers on Twitch, joining 100 Thieves or making the big switch over to YouTube Gaming. However, he puts none of those above famously stitching up fellow streamer Tim ‘TimTheTatman’ Betar with a Build-A-Bear teddy.

In a tweet, CouRage posted a clip of the perfectly executed prank – which happened over six months ago in August 2019 when CouRage was still streaming on Twitch – and described it as his “proudest streaming moment.” Under the ruse of sending TimTheTatman’s young son, Brew, a Build-A-Bear donning the jersey of his local college football team, and with a little help from TimTheTatman’s wife, he managed to pull off one of the sneakiest bits of self-promotion in Twitch history.

“My proudest streaming moment?” CouRage hypothetically asks in his tweet. “When I went to Build-A-Bear, custom built a Syracuse bear for TimTheTatMan’s son, shipped it across the country, and coordinated with his wife to have him open it live on stream just so that he would squeeze the hand and have it plug my channel.”

The cunning plan worked a treat, as an initially impressed and grateful TimTheTatman unboxed the bear to show Brew. However, on squeezing it to play the voice message, he quickly realised that this wasn’t as kind-hearted a gesture as he first thought.

When I went to Build-A-Bear, custom built a Syracuse bear for @TimTheTatMan‘s son, shipped it across the country, and coordinated with his wife to have him open it live on stream just so that he would squeeze the hand and have it plug my channel. pic.twitter.com/ciRAn4kYpu

A dumbfounded TimTheTatman quickly pulls the bear away from his microphone and on realising he’d been duped says: “I hate my friends.”

The original Twitch clip of the moment has been viewed more than 170,000 times, and CouRage’s tweet reposting the clip has over 37,000 likes.

It seems as if he doesn’t want people to forget about one of this conniving stitch-up in a hurry.