The Annapurna published cat game Stray has been quite the enigma up until recently, when The Loadout was invited to a press preview that enabled us to see the game in action. Its cat lost in a dystopian robot future vibe is certainly a unique concept, and the worldbuilding seems on-point, but the game’s short playtime and laid-back nature means it might be more alleycat than pedigree when it releases in July.

Stray has been in development for seven years since its conception, producer Swann Martin-Raget, the developer showing us the game, says. He’s guiding the cat down the dystopian, neon-lit streets of the game’s city, which is inspired by Hong Kong’s famous Kowloon Walled City. One of the first things he makes clear is that you can press a button to meow – we’re already sold.

Robots litter the streets – something already seen in trailers – but this time we’re given a glimpse behind the scenes. There are also out of the way rooms, buildings, nooks, and crannies with NPCs in them that you can interact with. This raises a question: how does a cat interact with… anything? The answer is that the cat wears a backpack that serves as a kind of docking station for a drone-companion called B-12.

B-12 can magically translate the robot language into cat, but the language itself has been handcrafted with Stray in mind. Every single symbol means something, meaning some will be able to decipher hidden messages in signs, graffiti, and the world around them during their playthrough.

This fits great into the overall structure of the game, as the devs tell us that while the story itself is presented in a linear fashion and can be completed in seven to eight hours, players are also free to explore at will, with nothing to urge them forward if they feel like exploring. And exploring and traversal seem thoughtfully implemented; there are buckets on ropes that you can hop in to quickly reach the ground from height, and you can claw at roller blinds to move them so that you can leap from windows.

The game has been designed to be taken at a slower pace, and that’s evident not only in gameplay but also the things you can do, such as curling up on top of a sleeping robot. Events like this are brought to life by the PlayStations DualSense controller, the features of which are used to mimic purring or a small cat really curling up in your hands – all delivered via haptic feedback, the speaker, and the adaptive triggers. 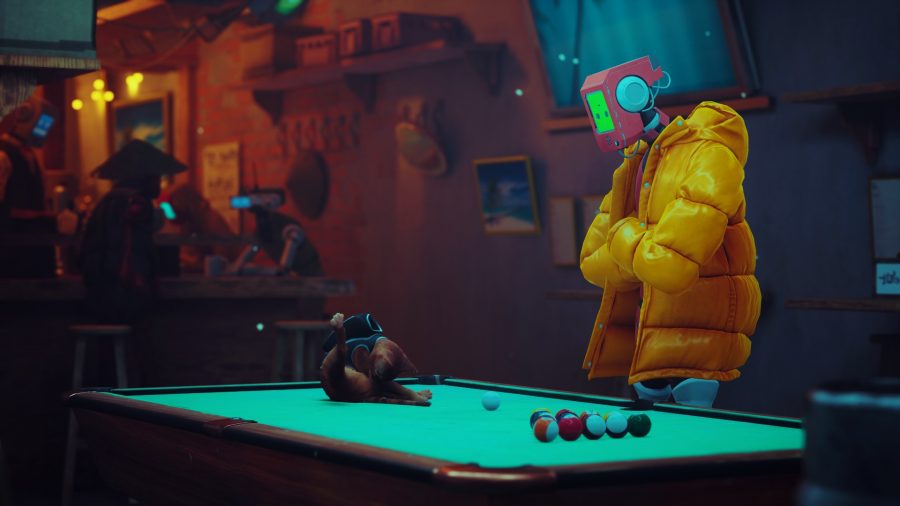 While Stray appears, for the most part, a relaxing game, there are chase sequences where you are pursued by enemies, and you can die, Martin-Raget tells us. Though, this will cause you to respawn again nearby, meaning the focus really is on the exploration experience and not “beating” the game in any kind of traditional sense. This is echoed by Martin-Raget, who tells us that they want the player to progressive steadily without major roadblocks; there are challenges, but the game will not be an overall difficult experience.

Stray, even after our time with it, remains largely enigmatic. It is clearly a game centred around story and adventure, but at under ten hours, it is going to really need to hook the player with a compelling narrative to meet expectations when it releases in July.

We’re excited, and those who take a shine to Annapurna games will likely find something to love here, but this isn’t an adventure that should be embarked on by those looking for fast-paced Hollow Knight gameplay mechanics.

Stray is coming to PlayStation Plus Premium and Extra on July 19.