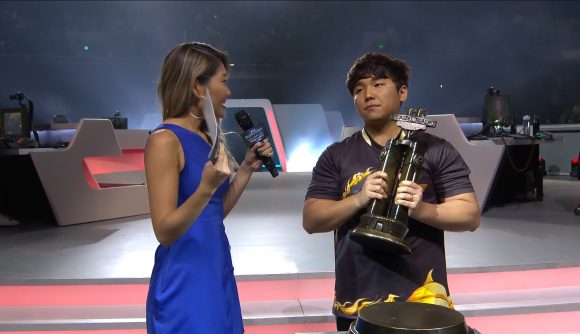 Diablo, Warcraft, and StarCraft were the three pillars of Blizzard Entertainment for decades, but a fourth tent pole joined them earlier this year: Overwatch.

Diablo IV rumors began flying well before Blizzcon was even a month away. Leaks dripped out from what was alleged to be an art book for the game. As the event approached, even more credible leaks came out. Finally, it was confirmed near the beginning of Blizzcon’s opening ceremony.

It wasn’t just Diablo IV subject to a torrent of leaks, though. Overwatch 2 has likewise been an open secret. Again, it was revealed officially and shown in detail at the opening ceremony. But what about Starcraft II?

Even World of Warcraft’s next expansion was known about days before Shadowlands’ official announcement yesterday. Deathwing was also announced for Heroes of the Storm, Warcraft III: Reforged’s beta opens to the public this month, and Hearthstone had a new expansion detailed yesterday.

Three of their major tent poles had a smattering of large and small announcements. And then there’s StarCraft. Unlike the rest, all was quiet on the StarCraft front leading up to Blizzcon. Aside from a report by Kotaku’s Jason Schreier back in June alleging that Blizzard had cancelled another unannounced StarCraft shooter to focus on Overwatch 2 and Diablo IV, there were no credible leaks or rumors about StarCraft. Indeed, Blizzard was silent as the grave about StarCraft this year.

There were only two announcements made for one of the Blizzard’s longest-lived franchises this year. Firstly, diamond and master-ranked players will be able to challenge Google’s DeepMind AI which The Verge recently reported is now superior to 99.8% of players. Secondly, Blizzard announced that long-time series villain, Arcturus Mengsk, will be the game’s next co-op commander.

They also gave a heartfelt tribute to former professional player, commentator, and prominent community member, Geoff ‘iNcontrol’ Robinson, who passed away earlier this year from a pulmonary embolism.

The 2019 #WCS Global Finals are dedicated to our friend and colleague, Geoff ‘iNcontroL’ Robinson.

Aside from that, there was not even a single panel for the series. The only one on the schedule is tomorrow’s episode of The Pylon Show hosted by Dan ‘Artosis’ Stemkoski. Unlike previous years, there are no looks ahead at StarCraft’s future this Blizzcon.

Adding to the feeling that StarCraft was being pushed into the margins this year was the World Championship Series being forced to cram its entire top eight into a single day.

Numerous GSL winners fell in the first round. The reigning champion, Joona ‘Serral’ Sotala, followed his history-making run from last year up by bowing out in the semi-finals. Riccardo ‘Reynor’ Romiti, age 17, made his first grand finals appearance at Blizzcon this year. All of this and some of the best play of the year was relegated to just one day. The grand finals started just before 1am on the east coast of the US, and Park ‘Dark’ Ryung Woo lifted his trophy just over an hour later.

It was a quiet year for StarCraft. It’s unclear whether there was just a saturation of other things for the company to focus on, or if this is Blizzard signaling to the world that they will soon be sunsetting StarCraft II.