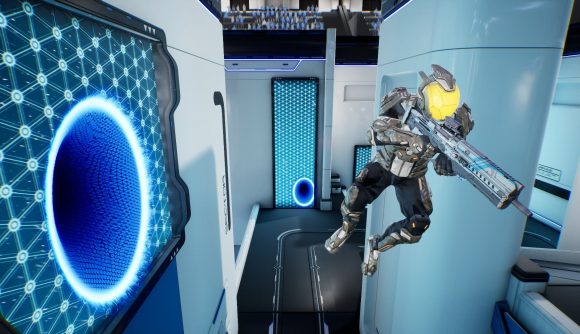 1047 Games’ portal-poppin’ first-person shooter Splitgate has gone down as one of the surprise packages of the year. After launching on console during the summer with an open beta, it became a hit with FPS fans. For competitive-minded players, its ranked mode was the arena of choice, but for those at the very top of the Splitgate ranks, there’s now a new goal to aim for.

1047 has today announced the first developer-led esports competition for Splitgate: the Splitgate Pro Series. The SPS will feature a $100,000 total prize pool (made up of both cash and prizes from one of the competition’s partners, ASTRO Gaming) split up over several events, and will be fully cross-platform, seeing console and PC players compete together.

The Splitgate Pro Series will be solely online, with Beyond being chosen as the tournament platform of choice. Starting October 17, there will be six weekly qualifier events, each with a $5,000 prize pool. During these qualifiers, players will earn points based on their placements. Rosters are not locked until the final qualifier, so players are free to form different teams for each qualifier.

After the sixth and final qualifier, the top seven teams on the leaderboard qualify for the Grand Finals, where $60,000 worth of cash and prizes is up for grabs.

There will then be a Last Chance Qualifier to decide the eight and final team to qualify for the Grand Finals. The Grand Finals will take place on December 12. A full schedule, how to compete, and more SPS information can be found here.

Splitgate’s proper esports debut will be an exciting one to see unfold, and will also wrap up just one week before the main esports competition of its closest rival, Halo Infinite’s Championship Series, begins with its HCS Kickoff Major in Raleigh, North Carolina.

1047 has built a popular, free-to-play FPS, but whether it can translate that into an enjoyable and successful esport will be a different challenge altogether. However, this seems like a pretty good place to start.