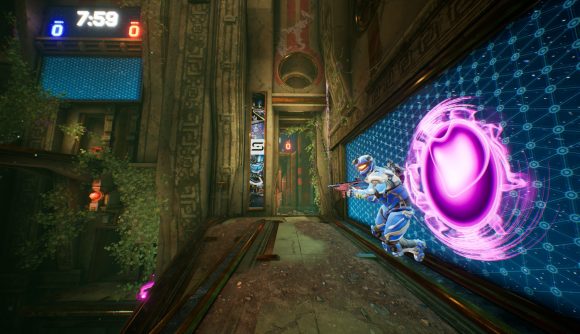 The team behind portal-packed first-person shooter Splitgate has revealed that the game’s successful open beta will not be ending this month and will instead continue “for the foreseeable future”. This means the actual 1.0 full release of the game, which would’ve come soon after the beta, will also now be delayed indefinitely.

1047 Games has decided not to put a new Splitgate beta end date in place as it continues to attract more and more players and works to improve stability and scale the shooter up. The studio also reports that Splitgate has been downloaded over 10 million times in its first 30 days in open beta, and that it’s concurrent player count has risen from 4,000 to around 175,000 in the space of a few weeks.

As well as the announcement that the beta will be extended, 1047 also says that a further “significant” announcement will be made during Gamescom’s Opening Night Live event on August 25.

While the beta is going to be continuing, the current Beta Battle Pass will be ending on August 24. 1047 does say however that it has “several content updates for fans planned through the rest of this year.”

Despite the spike in players overwhelming Splitgate’s servers in the first couple of weeks of the open beta, 1047 has managed to increase capacity to a size where server queues are now either short or not required at all.

In the press release announcing the beta extension, 1047 co-founder and CEO Ian Proulx says: “We want to be prepared for massive scale when we officially launch, all the while continuing to improve the beta with frequent updates, additional features, and improvements to server capacity.” Splitgate could now go down a similar route to Fortnite, which was kept in an ‘Early Access’ beta state for around three years before finally launching fully in 2020.