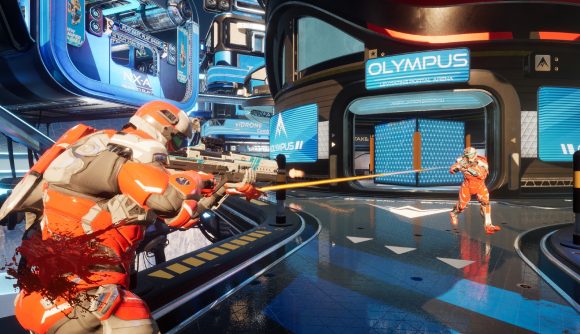 The free-to-play shooter market just got a little bigger if you’re a console player, as an intriguing PC-exclusive first-person shooter called Splitgate is making its way over to PS4, PS5, Xbox One, and Xbox Series X|S.

If, like us, you’ve been patiently waiting for the Halo Infinite release date to come around, then this little-known shooter could be the perfect way to pass the time until then. The gameplay is very Halo-y, but with the added twist of portals – which are flavour of the month at the minute thanks to the next-gen wizardry of Ratchet and Clank: Rift Apart. While its player numbers have dipped on Steam in recent months, a console port could give it a new lease of life and a spike in popularity.

Splitgate will also become fully cross-play, so gamers on any platform can play together. That should hopefully be good news for queue times.

While the gameplay itself looks pretty compelling, there seems to be a fair bit of content to keep players entertained. You’ve got ten different game modes, and 20 maps to play on. Not too shabby.

The big launch on console is slated for July 27, so it’s just around the corner. There’s also an open beta going live on July 1.

The free-to-play console news for Splitgate was revealed during the IGN Expo, and if you missed any of the news, trailers, and announcements from the showcase, you can catch up right here.