Split or Steal is the latest gathering storm on Twitch, a gamified version of the prisoner’s dilemma that puts you into quickfire match-ups where you have two minutes of text chat to try and work out whether to split the prize pool with the other player, or to steal it all for yourself, in addition to a chunk of the cash they’ve brought with them up to this stage.

Rootpew’s game is free to play, which opens the floodgates to every eager and strapped for cash Steam user dreaming of a big payout. There’s no pay-to-win element in Split or Steal, in fact the only in-game purchase a player can make is the doubler, which doubles the prize pool players take at the end of a successful tier 10 run. The rest of the cosmetics, which cover costumes, stat-boosting buildings and even special lighting for your character, with the most heinous being a Brexit themed light, can all be picked up after grinding the high-stake tables.

With these structures, there’s also the addition of a karma system, general chat and all sorts of ways for you to be punished or honoured for your thieving ways. These systems, and my attempts to break them completely, are how I became the Split or Steal bogeyman, at least for a little while.

“I wouldn’t lie to you on tier one, right?” I lie at the first hurdle. I click steal, unknown to my opponent. No one would actually bother to steal at the very first match-up, the gain is nearly meaningless compared to what you can snag during the higher levels. As a result, the other character clicks share: to steal at this early stage would be pointless.

For the biggest payout, the game asks you to push through ten successive levels, splitting or stealing the whole way up. The lower tiers offer a meagre pot for you to split or steal, while the last three tiers offer up huge rewards and obscure details like your name, karma and information so you can get devious.

Steal before those last few rounds though, and you’re daubed with red text that brands you as having stolen in your last round. Problematic, unless you’re willing to be bare-faced in your quest to lose friends and alienate people.

This isn’t a problem for me. I open strong on the second tier: “Hotdogs always split!” I lie again, adding: “I get that it looks like I steal, but I was in with a kid and he was typing slurs in chat.”

I’m dressed in a hot dog costume. An in-game movement has sprung up to suggest that those dressed in hot dog outfits will always split. It’s a shorthand, a shorthand that can be abused. I click steal. 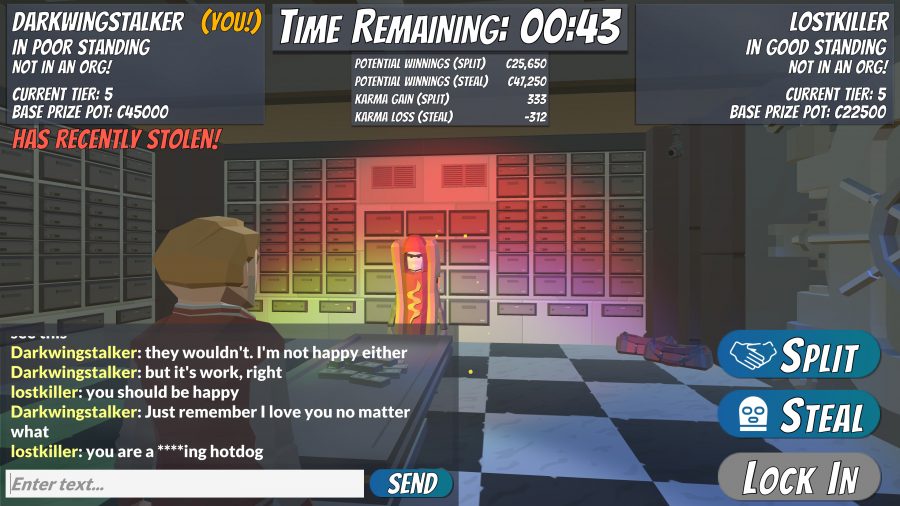 “It happens!” says my victim, wishing me luck for the next round alongside a saccharine smiley face. Text chat robs speech of meaning, but I imagine it in a sing-song voice. Moments after my victory, they took to the in-game general chat to dub me a thief, in addition to a few choice insults.

I match again. “Hotdogs always split!” I say, with an opening lie completely at odds with the red text promising I stole on the last round. “Sorry, the last match-up told me he was going to steal, so I stole and he actually split. Oops.”

I click steal. “I’ve clicked split. I know you have no reason to trust me, but I really don’t like screwing people over.”

I sell my innocence a little hard, but he takes it. Three wins in the bag for me, one step closer to a big payout. A variant on this lie has got me through hundreds of matches, and here it’s got me to the high stakes rounds. I don’t have to lie about my red text anymore, as no one knows how trustworthy I am, meaning I’m free to get creative.

Most people assume the best of you. Sound eloquent, start a conversation, and most players are going to assume you’re a good egg. Split or Steal is a weird utopia, because the best way to get a big, reliable, payout is just to agree to split all the way up tier one to tier 10. Really, it’s a co-op game. Unless you decide you want a bigger cut for yourself.

Which, of course, I did.

This is perhaps the real reason that I’m so determined to click steal as much as possible. If everyone is playing nice, striving together to get rich, then is it really a game at all? I bought several buildings that would generate good karma for me over time, starting each day with a clean conscious, my karma marking me out as a Very Good Person no matter how many people I screwed over.

But I did develop a bit of a reputation. After a couple of hours of play each day, I found people were less likely to fall for my tricks. During Split and Steal, when another player chooses to steal your only choice is to be stolen from or to hit steal yourself, which knocks you both out with nothing, cursed to start the climb from the bottom.

I’d been outed so constantly as a traitor in the general chat all players have access to that it was assumed I’d probably steal from them no matter what. Suddenly, I couldn’t progress past the first few tiers, and people weren’t shy about telling me what they thought of thieves. 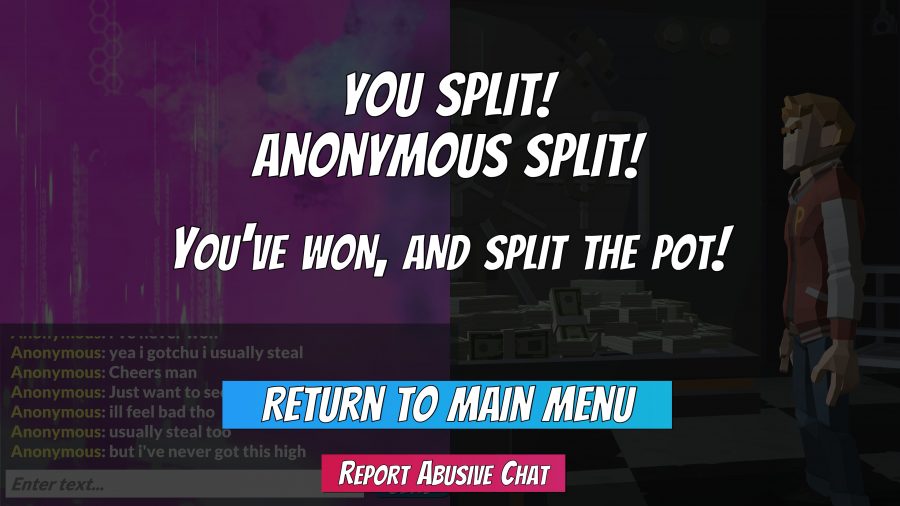 So, I was driven away somewhat. But, given a day for my karma to regenerate, and armed with a burning desire to ruin people’s day, I was back for me. I’ve been doing this for two weeks now, ducking in and out to get as much cash as possible. The situations it puts me into are frequently bizarre, and it’s easy to see why streamers love to show their more devious side. It’s Gmod or Kane and Lynch’s Deadly Alliance but at a grassroots level, with simple deception as easy as just typing lies into text chat: the equivalent of typing into a CS:GO lobby that your other account is Global Elite.

With Round 10, I promise I’ll split. I even click split to make me sound more honest, without locking it in. “I’m a games journalist writing about the game, and I need to get a screenshot of the win screen,” I say. “I’m definitely going to split, I just want to help the game get big by writing about it, and I’ve never got that far before.”

I lock in the steal.

“Ok, good luck with your writing.” says my final opponent. “I usually steal, but don’t want to mess with your money.”

He splits, I take it all, and smile to myself in the dark. Perfect.

Read More
Split or Steal on Twitch
Who is Summit1g?
Biggest esports games