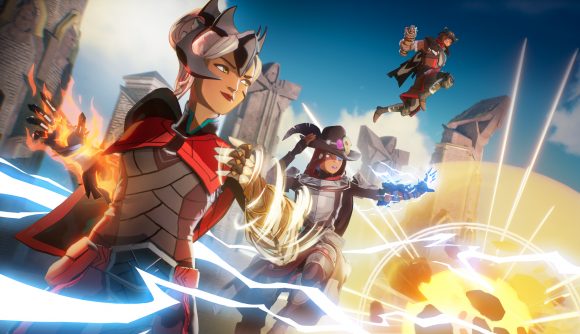 You might think battle royale games all play the same way, but Spellbreak is looking to break that mould. The free-to-play game, developed by Proleteriat Inc, hopes to change the way you play the game by introducing quests in its first ever season.

But these quests won’t be gimmicky. In fact, they’re more RPG in style, and will answer players’ questions about the history of the Hollow Lands and the mysteries it contains. They’ll also force you to change the way you play, making each and every Spellbreak game a new adventure.

It’s a clever system and one we got to experience for ourselves during a preview event. While players will only get the chance to run through three quests each week for 12 weeks, they’re designed to satisfy player curiosity and shake up the meta simultaneously. They also provide exciting new gameplay features that’ll soon shift the center of the battleground.

One of these new features are Spellstorm rifts, which pop up in the Spellstorm over the course of the match. If you interact with one, it’ll suck you in and spit you out somewhere over the safe zone – something the team is interested in seeing in practice.

“Once this is in the wild, we’re really excited to see how players interact with them,” Cardell Kerr, the game’s executive producer tells The Loadout. “People will be competing for them, so I think you’ll see interesting battles pop up around the map.

“For solo players, it inherently makes the game more interesting. But that’s the point; we wanted to add gameplay mechanics that were interesting in quest context that also add to the general structure of the world and its unification.”

There are dangers to using it though. Only one person can use a Rift and you have no control over where it spits you out. As such, using one can actually hinder your chances of winning depending on where you end up and if it throws you in the path of another team – but that’s all part of the fun, right?

There’s plenty more in the pipeline too. The new chapter delivers three new quests each week for 12 weeks for the princely sum of 1,000 gold. It might sound like a battle pass, but it’s much more than that – and something that you might see other battle royale games pick up in the future.

Spellbreak Chapter One drops on December 15. You can download the game for free now on PlayStation, Xbox, and PC right now.