If you want to be a pro skater, you’re going to have to get fancy with it. No, seriously, ‘Fancy’ is the measure of how fast you can go, and ultimately how high you can jump in Glass Bottom Games’ new feathery-fronted reimagining of the skateboarding game sub-genre, SkateBIRD. Following Birb’s journey to help their Big Friend, SkateBIRD is the sort of shakeup the sub-genre should welcome, even if the execution isn’t always up to scratch.

Birb’s Big Friend used to be cool, but now that they have a job and other not-so-cool commitments, they’ve hung up their board. As we all know, work sucks, so Birb – as well as the many friends it makes along the way – embarks on an adventure to five different Micro Machines-esque parks in order to help fix Big Friend’s life through the power of skating.

Each park is filled with a solid variety of fun little missions to complete. One mission tasked me with doing flips and tricks to help tidy up Big Friend’s filthy room – call that Manual labour. Another had me grinding across a roof ledge to set off fireworks for very important reasons that I’m not at liberty to discuss. And, of course it wouldn’t be a bird-titled skating game if there weren’t lots of letters and miscellaneous objects like paper clips and snacks to collect. Helping Big Friend is hungry work, after all.

Before you head out into the big wide world, though, you’ve got to pick the right bird for the job. SkateBIRD offers a great deal of avian diversity to commandeer, with everything from kingfishers to quails getting their chance to zoom around Big Friend’s world – and they all look great visually. 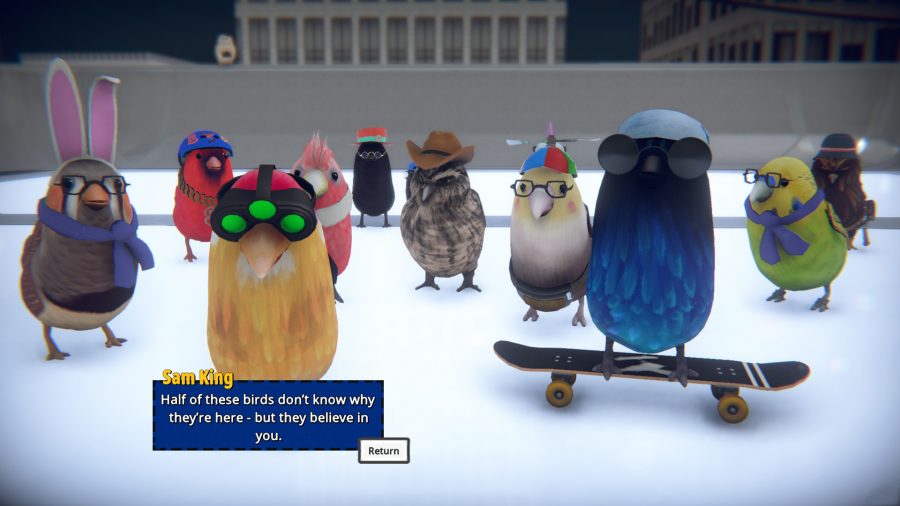 Customisation options also provide everything you need to kit out your Bird. From Roman helmets to eye patches, fat chains to little bow ties, SkateBIRD has you covered. But the best thing about SkateBIRD’s customisation is that it’s not a one and done deal – you can go back and switch things up as much as you want.

One minute I was a tiny mohawked hawk, the next I was a hipster rose-breasted grosbeak

One minute I was a tiny mohawked hawk, the next I was a hipster rose-breasted grosbeak who owns a small independent New York coffee shop called Central Peck. You can even collect more cosmetics during your adventures, including some pretty snazzy night vision goggles which allowed me to channel my inner Solid Snake during my top secret mission.

The praise for SkateBIRD’s aesthetics doesn’t stop there. I absolutely love the little oddities found in each park. Implementing wave ramps into office furniture, using tooth floss as pipes, and being able to grind down the side of a pizza box are all part of what makes it so charming.

The other crucial element that makes or breaks the skating experience before you even pop your first Ollie is the music. SkateBIRD’s self-dubbed ‘lofi bird-hop’ soundtrack is fueled with all sorts of instrumental elements that create a suitably funky backing to your grind. Composer Nathan Madsen’s use of everything from old-style vocal samples and vocoders, to even the chirps of birds, provides a real zest to each sound, making for a very satisfying listening experience.

The guest features on SkateBIRD’s soundtrack also each provide something unique to the mix. Illicit Nature’s punk tracks, Grave Danger’s ska stylings, and We are the Union’s pop punk bops provide that traditional ‘skate’ sound we’ve come to associate with the form. Meanwhile, Holy Wow takes each of those styles and shakes them up with glitchy 21st century electronica like it’s dropping musical Mentos into a bottle of fizzy pop.

Now we’re ready to skate, we need to figure out how to actually pop that aforementioned Ollie. Infused with with the spirit of that legendary skater no one seems to recognise in public, SkateBIRD’s control scheme draws more from Tony Hawk’s Pro Skater games than the thumb-twiddling Skate titles. So if that’s what you’re used to, you’re in luck. 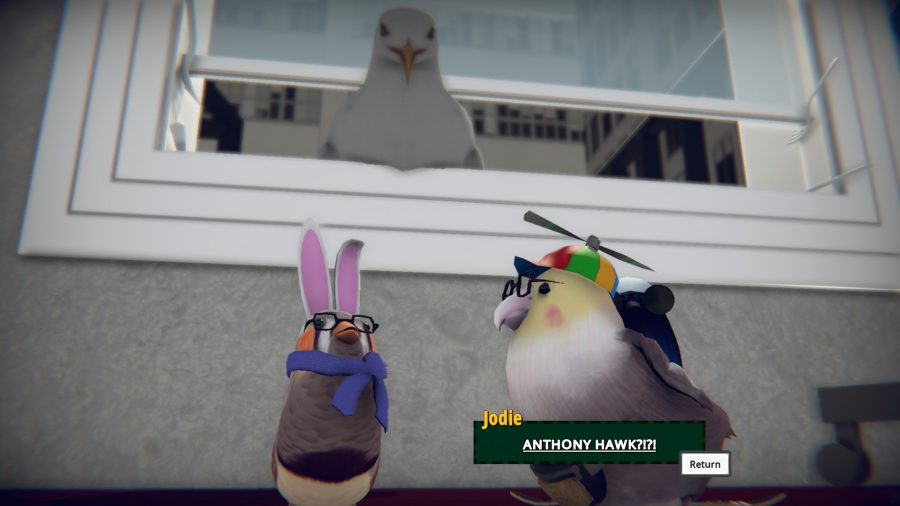 Trick variety is solid, and controls are intuitive. A quick up-down flick on the left joystick sends you into a Manual, while the direction you flick it in will dictate what kind of trick you pull off mid-air. But that’s not to say landing tricks is simple. Anyone familiar with traditional skating games knows that should you grind or lip hang, you’ll have to maintain your balance – the difficulty of which can be adjusted in the accessibility options. Additionally, if you go up a ramp, then you better make sure you position correctly mid-air to come back down cleanly or face bailing out.

You also have a dedicated ‘screm’ button, which lets out a mighty chirp or trill depending on your equipped bird. Oh, and a well-timed screm will also earn you some extra points towards a combo, so don’t be afraid to use your pipes regularly – trust me, it adds to the experience.

The controls may be simple enough so that it’s far, far easier for me to land my tricks than it is to land my horrible, horrible puns. However, the most difficult thing about SkateBIRD is actually staying on your board, and this is where its major, maddening flaw rears its big bulbous beak.

Unfortunately, the challenge in completing SkateBIRD’s story missions didn’t really come from any real test of skill. It came more from racing the clock to build up my Fancy after being frequently ejected from my board because I clipped a seemingly flat surface. Granted, you can adjust how hard it is to be knocked off your board in the settings – a great way to switch up the game’s difficulty might I add – but in my experience this only helped a small amount.

The game’s mechanics can also be pretty inconsistent. For example, another mission saw me having to Ollie off the top of a half pipe to get enough air to reach a high-up item. I knew what to do, and once or twice I got close, but it seemed that every time I tried to recreate the exact same feat I got wildly different results. 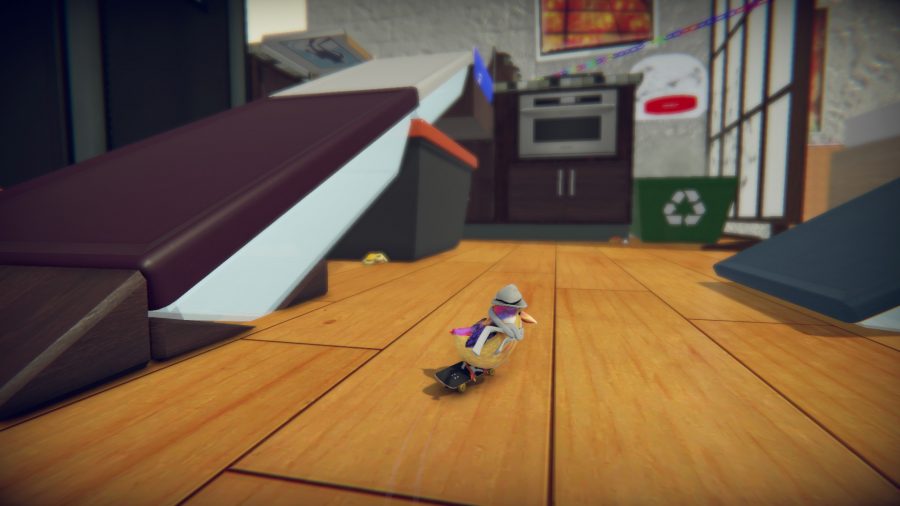 Another unique level implementation is the inclusion of air vents that can send your flappy fella flying, which are super fun to ping off of. Though, once again, trying to figure out where the game will send you can sometimes be less of a science and more of a test of blind faith. For example, one of the parks requires you to Ollie off an air vent to catch a ride up to the next level, but it’s unnecessarily finicky. If you’re moving while you jump, you’ll most likely hit the opening above the vent and if you jump too high, you’ll smack into the ceiling above the level you’re trying to get onto.

It oftentimes feels like SkateBIRD’s geometry is working against you because of a random lip here or there. This disrupts the flow between elements of each park and made me less-inclined to try more adventurous routes in my journey to the next level.

When trying to build combos, Bird sometimes gets a little bird-brained mid-air

Even when trying to build combos, Birb sometimes gets a little bird-brained mid-air, and will flatten itself out at the top of a ramp, plummeting to another reset unless you can quickly regain control with an Ollie – though sometimes this isn’t enough to nail the landing. In the end, I simply gave up on the story because I had used my inner ‘screm’ button more than the one mapped to my controller. Suffice to say, Glass Bottom’s offering is still a little rough around the edges.

And it’s really such a shame, because when SkateBIRD’s mechanics work properly the experience is silky smooth. Carving up and down ramps to build up speed, before getting some big air and executing some meaty combos feels fantastic, while each level is full of big ideas for your legion of tiny birds. Unfortunately, it’s difficult to enjoy the experience when you’re once again bobbing along the floor after a random bail, or getting caught up in the awkward geometry of some of its levels.

When you take away those cool little birds and focus purely on the skateboarding, SkateBIRD can offer shades of Tony Hawk’s Pro Skater 1+2 remakes in one instance, and the ill-fated Pro Skater 5 in another. If Glass Bottom can improve the consistency of the experience in future updates and continue to polish some of the edges, then I have no doubt that SkateBIRD will reach its full potential. For now, however, it’s much further down the pecking order than it should be.

SkateBIRD offers cute birds and chill vibes in a neat package, but inconsistent and, at times, frustrating mechanics, as well as a lack of polish, makes it difficult to really enjoy the strong audiovisual elements it brings to the table.