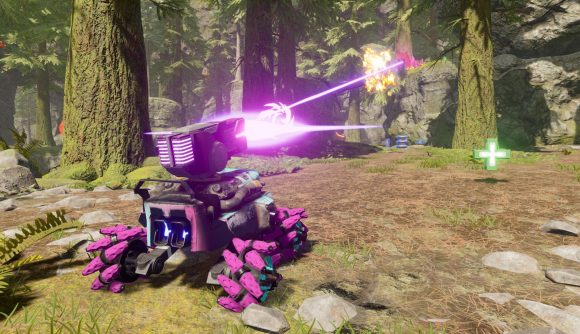 Stainless Games is built on the foundations of traditional car combat games. Known as the brains behind the Carmageddon franchise, the indie developer has put two and a half years of blood, sweat, and tears into ShockRods, a new car arena shooter that’s a bit like Quake and Rocket League mashed together.

The game, which is out on Steam and Apple Arcade now, has the real makings of a competitive game, and although some of that competitiveness has been toned down for the mobile port, there’s a real hope that the community will shape ShockRods into something bigger – whether that’s a small but interested playerbase or a new esports pulling in views online.

“With games like this, they evolve other time and develop in ways you wouldn’t necessarily expect,” Sam Corser, associate producer, tells The Loadout.  “We’re trying to get the game out into the hands of people and we want them to tell us where they feel the game should evolve. The community is really powerful – they know what they like and what they want – and we want our games to be fun. In a way it’s [the development] not up to us.

So to nurture ShockRod’s competitive element and keep it fun and fair for all, Stainless Games has been painstakingly analysing player data and feedback to ensure each and every aspect in the game is balanced. And while the team is aware that feedback to the game is somewhat mixed so far, Stainless Games is taking it on the chin and working hard to improve the game.

With more content drops coming in the near future and a firm commitment from Corser that the studio is “planning on supporting ShockRods for quite a while,” we’ll have to wait and see how the community take to this kill or be killed game and what direction they’ll take it.

Read More
Biggest esports games
Who is Ninja?
Who is Shroud?