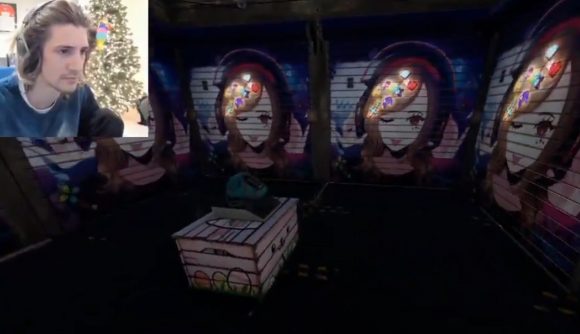 Since Félix ‘xQc’ Lengyel moved from OfflineTV’s PvP-focused Rust server to the server dedicated to roleplaying, viewers might have expected him to have a less turbulent time. However, instead of being constantly killed in a spectacular fashion, other players on the server are coming up with creative ways to trick and con the Canadian streamer.

Albert ‘BoxBox’ Zheng spent three hours on his own stream building a Pokimane-themed death trap. His bait was a box, with a telephone perched atop its humble lid. We all know that people love boxes – after all, who knows what could be inside? Even the biggest streamers can’t resist the temptation.

As xQc picks up the phone, BoxBox informs him that he is the lucky winner of 200 scrap! Like a perplexed pensioner with an inbox full of scam emails, xQc swallows the bait whole, falling for the trap hook, line, and sinker. But his fate is truly sealed as BoxBox says the ominous words: “Are you a fan of Pokimane, by the way?”

No sooner had xQc processed the unexpected question, than Pokimane-themed garage doors slid down on all sides, finding himself completely trapped.

spent 3 hours making this death trap but every second was worth it pic.twitter.com/O9c81ShlgK

You can see the results for yourself, but the whole cage was electrified and there was no escape. The streamer screams for help, but his cries fall only on the deaf ears of eight wordless Pokimanes as they silently watched him suffer.

After the clip ends, BoxBox kept to the spirit of the roleplaying server and kindly gave xQc the 200 scrap he was promised. This time around, curiosity nearly killed the cat, but it certainly didn’t kill the content.