Rugby is a difficult thing to translate into a videogame. There are complex laws, which change on a regular basis, big collisions, and countless tactical opportunities. It’s a fluid, spontaneous game that looks different with each and every match. It’s no wonder, then, that so many videogame developers have stayed clear of the sport – until now.

Eko Software’s Rugby 22, which hits shelves today, is a love letter to modern rugby on paper – there are options to shape the tactical outfit of your team, there’s a renewed focus on kicking in-field, and there’s a distinct attempt at promoting running rugby. Yet, when you actually sit down to play Rugby 22, all of these points, which form the core tenets of modern rugby, slip away. It quickly becomes clear that while this game was made by rugby fans for rugby fans, it’s not the one we’ve been clamouring for for years.

While it’s worth saying that Rugby 22 is an improvement over Eko’s last game, Rugby 20, it still leaves a lot to be desired. Its control scheme, which you’re not fully introduced to – even in the game’s dedicated tutorial – is far too complicated, leaving you in the lurch in pivotal moments. I’ve put about 12 hours into the game so far across the Xbox Series X|S and PlayStation 5, and despite playing through the tutorial three times, it took me about two attempts – and one online game with a friend – to work out how jackaling works.

The tutorial is designed to walk you through the basics of rugby, in the same way your first training session would. You’ll learn how to make both short and long passes, how to throw players into a ruck, how to scrum, and how a line out works.

What it doesn’t show you, especially in the later stages, is how to actually compete for the ball – something which is pretty important in the grand scheme of modern rugby. 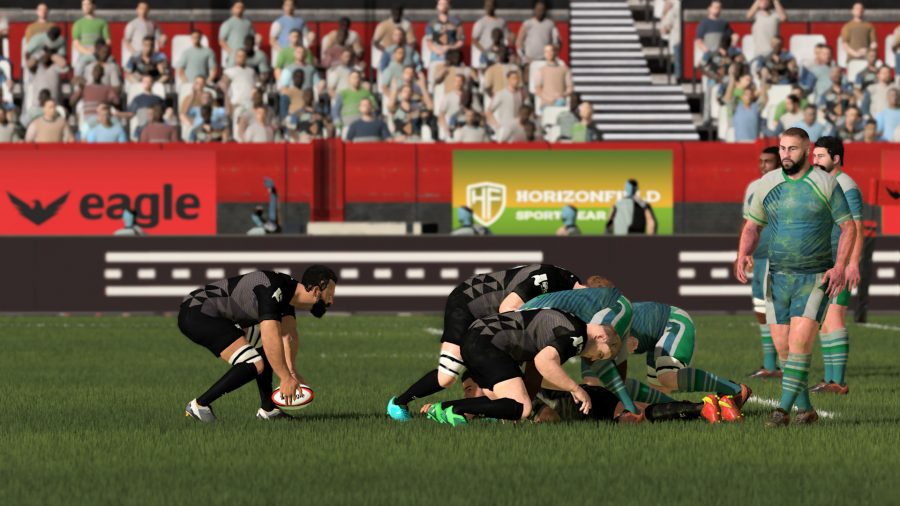 While I’ve got a reasonably good understanding of rugby from my playing days, I worry about how Rugby 22 is going to be received by new players. There’s no real attempt to explain these situations, and given the breakdown is probably the most confusing part of a rugby game, not explaining what a jackal is, let alone when you should attempt one, is going to end up frustrating more players than not.

When you do finally get to grips with the control scheme, Rugby 22 offers several modes: Quick Match, Online Match, Career, and League. Quick Match is exactly what is says on the tin, allowing you to jump into a game against AI or a friend with no strings attached, Online allows you to play online against a friend or another person, League allows you to play a season as a team from one of five leagues (Top 14, Premier League, URC, Pro D2, and the Nation’s Trophy), while Career allows you to take your custom team, created using player cards you unlock as you play, against AI or a friend online. 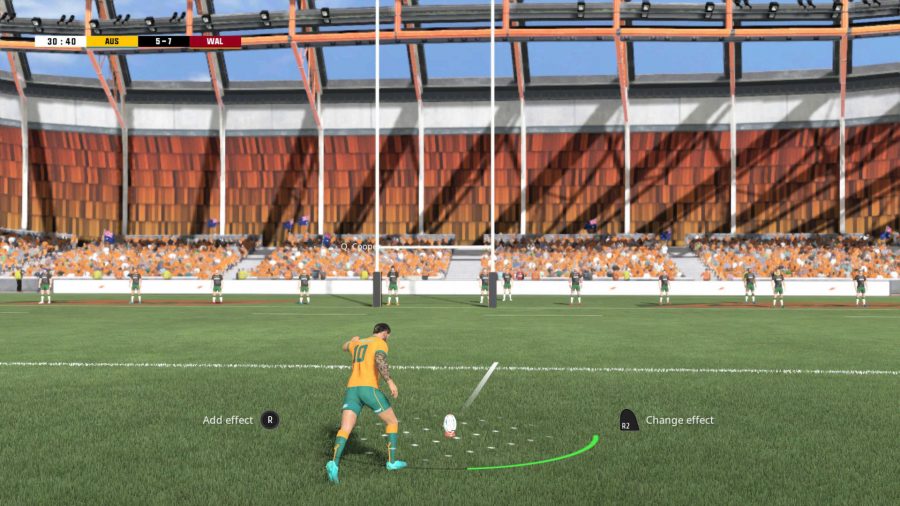 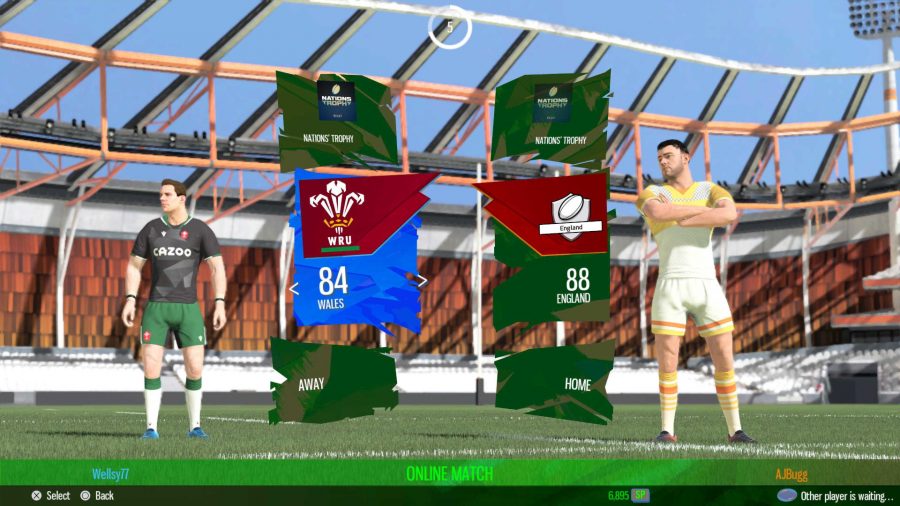 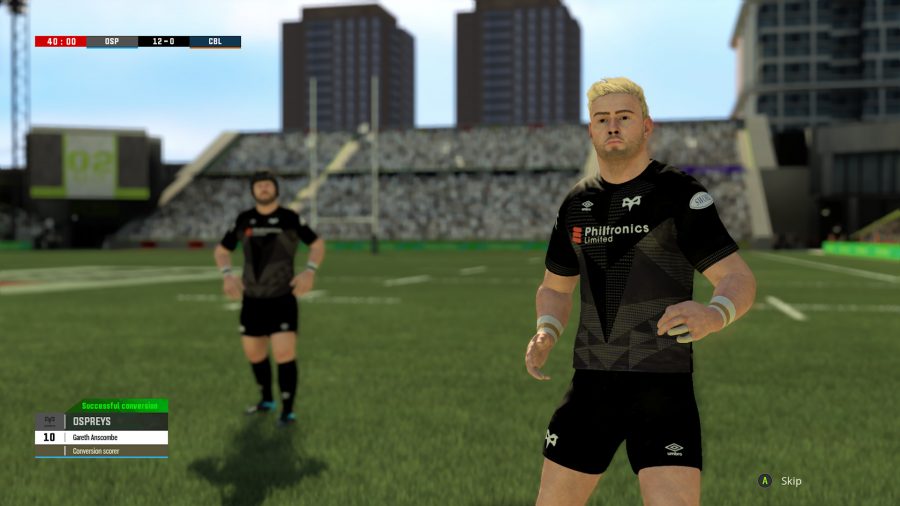 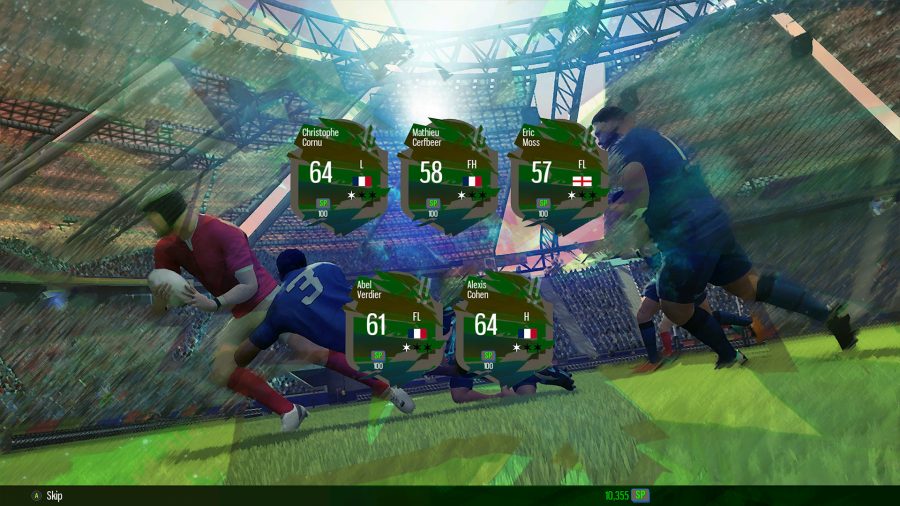 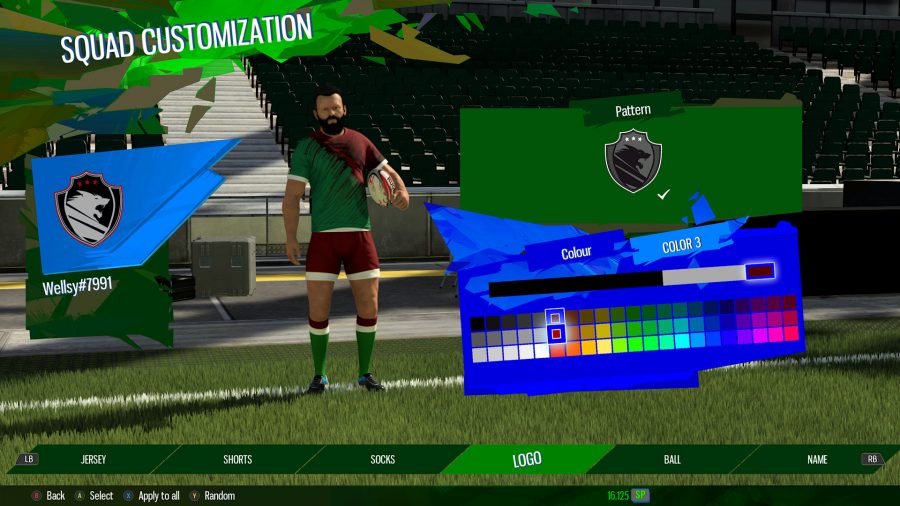 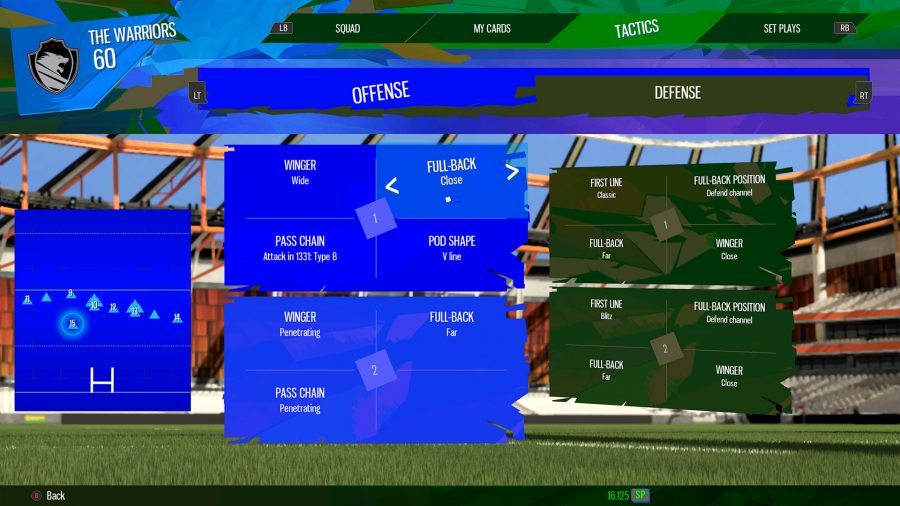 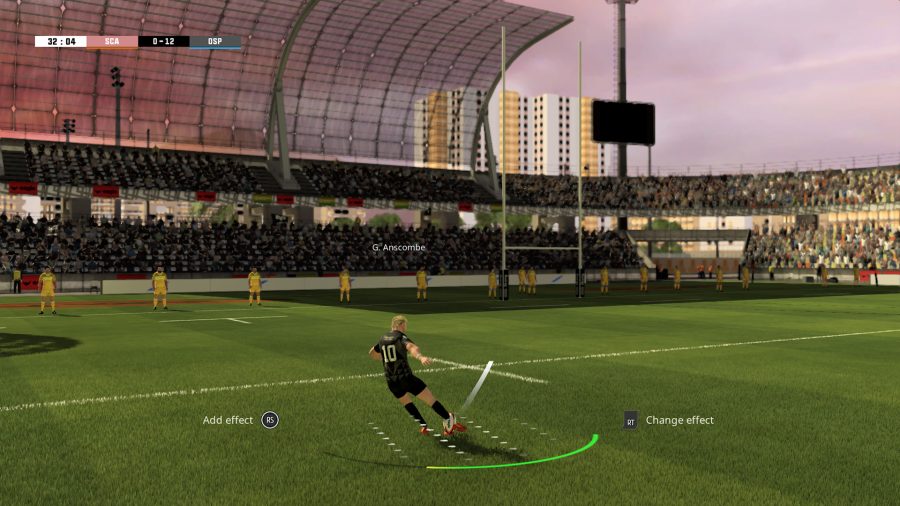 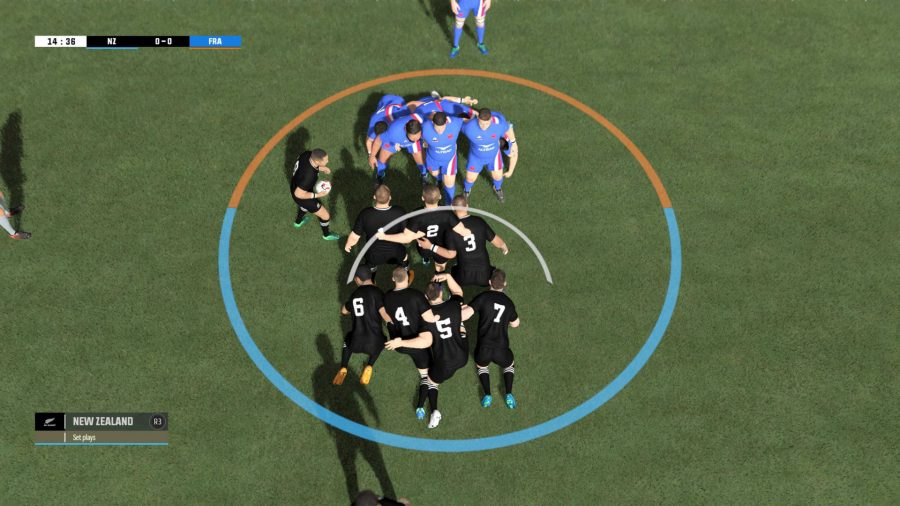 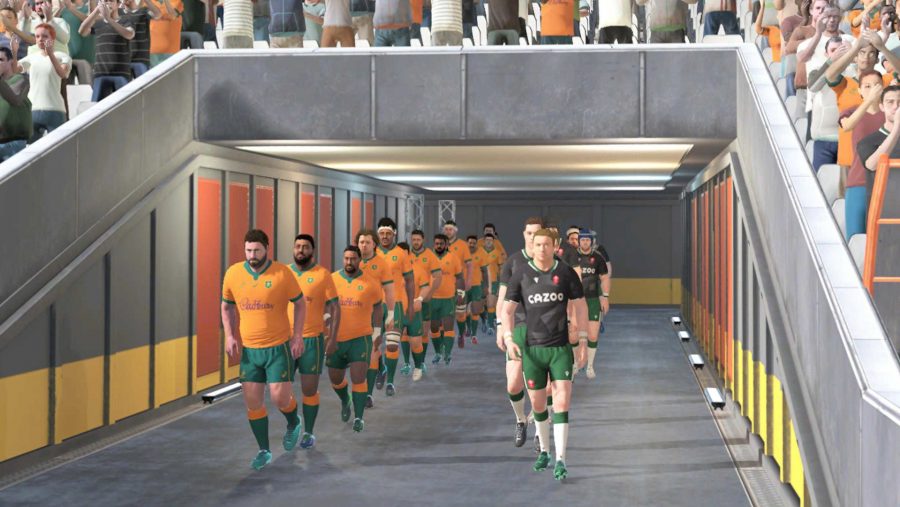 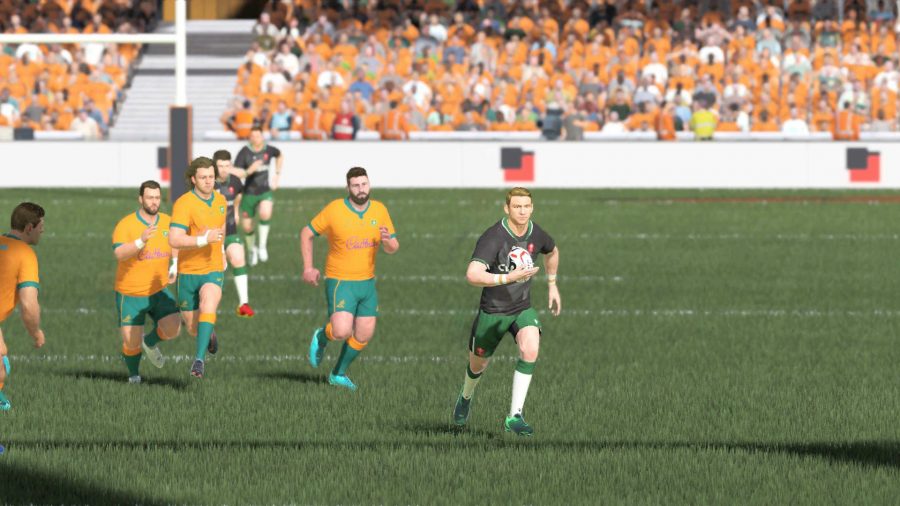 League play is probably one of the better modes in the game, allowing you to take your team through the ranks. All the teams from the Top 14, the Pro D2, and the URC are licensed, but if you’re looking to play as your favourite team from the Premier League – or perhaps a national team like England – you’re out of luck.

Rugby 22 has more licences than its predecessor for sure (58 to be exact), and while it’s great to see teams like the All Blacks and the Wallabies join the ranks, it’s frustrating – especially as someone who follows top flight English rugby – not to be able tear it up on the pitch with an old favourite. While you can play as Leicester – as in Leicester Tigers – for example, you’ll have a boring old kit that doesn’t even reflect the team colours, and randomised players that you have no affiliation with.

I didn’t think this would bother me at first, but as I set up more and more matches – particularly national line-ups you’d expect to see in the Six Nations and the World Cup, I realised I wasn’t particularly fond of being fouled by that well known English number eight, Emmanuel Watson.

This frustration is even more prevalent when you consider the potential of Career mode. While licensed players do feature in the mode, which, by the way is heavily influenced by FIFA’s Ultimate Team, there’s a lot of unlicensed ones in there, forcing you to check the stats of essentially Football Manager-style regens before you can even assemble your starting 15.

if you’ve got an egg-shaped hole in your life, it’ll fill it

When you find a licensed team that you actually quite like playing, though, the game does sink its claws in you. Yes, it’s a bit of a mess, and by no means a replacement for the rugby games Electronic Arts was known for creating, but if you’ve got an egg-shaped hole in your life, it’ll fill it. Games are five or ten minute affairs that pass the time, and while the AI differs massively depending on what difficulty you’re playing on, you’ll soon turn what appears to be mindless button mashing into something a little more refined.

This is in part, due to the game’s new tactical options, which allow you to set your team’s offence and defence up to your liking. You can have your defensive line operate a blitz defence and make sure your back three operate a pendulum system. You can even decide how many pods you want off the nine, the shape they take, and how close together they are. In this sense, Rugby 22 offers much more control over the way you play the game than ever before. But pulling off those special moves – especially things like loops and switches – can be a real pain.

Unless you’ve put in a couple of hours on the training ground, moves just aren’t possible to use on the fly. It’s yet another feature that seems to have been seemingly missed from the tutorial, which is strange really, given it’s one of the game’s biggest selling points. Your players will often feel quite sluggish at the start of the move and unless you hit your runs and your buttons precisely, you’ll be taken to the floor by the opposition and forced to start over again.

It’s this lack of direction that ultimately lets Rugby 22 down. You wouldn’t ask a winger mid-match to shove their head in a scrum without telling them who they needed to bind to and when to engage, so why expect a player to know how to use a brand new system without showing them first?

In your first couple of hours playing Rugby 22 then, you’ll be forced to button mash in the hopes of getting somewhere. Then, when you start to get to grips with the control scheme, you’ll have better, more organised games that make it feel more of a joy to play.

But in between that and questionable commentary – I’d honestly prefer John Inverdale spouting rubbish out from a studio than hearing the word ‘dynamism’ again – Rugby 22 becomes a repetitive affair that’s only fun to play for a couple of hours.

In fact, in all the time I’ve had with the game, in which I’ve completed a full League run, and played countless Quick Matches and Career games, the most enjoyable experience I’ve had so far is playing online against a friend. There’s nothing quite like playing a grudge match, in which you score a try with a grubber from prop Wyn Jones, or win a game with a well-placed drop goal kicked by none other than tight head Tomas Francis. This is the mode I know I personally will come back to time and time again – even if the friend invites are sent out in French – but given the co-op options other sports games offer, it still leaves a lot to be desired.

What this reiterates then, is that rugby games have a long way to go to become mainstream. Rugby 22 is a game made by rugby players for rugby players. And while it won’t entice new fans in, it also fails to advance the game’s offerings from anything we’ve seen before – and in the mind of players, that’s a huge mistake.

After sitting at the helm of three big rugby games, it seems Eko Software is firmly stuck in a ruck, and no amount of jackaling will save it or Rugby 22.

Eko Software promotes Rugby 22 as the first modern rugby game to grace new generation platforms, but this is far from that. While the new and improved tactics feature is a welcome addition, Rugby 22 feels like a game stuck in the early 2000s with a lack of modern-day features expected of those in the genre.