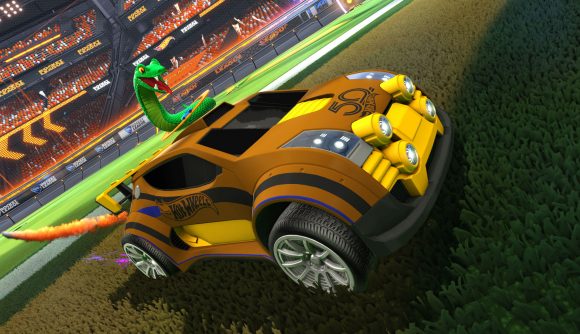 As customary with big updates, Rocket League is getting a slew of fancy new changes with Season 4. From tournament changes to a new Rocket Pass, Season 4’s patch notes make for interesting reading. However, dig a little deeper, and you’ll find there’s a pretty important change for content creators.

After Twitch’s widespread DMCA problem, Psyonix got to work trying to protect its players from getting hit with strikes online. In Season 4, the studio’s hard work can finally be seen in the form of the Streamer Safe Music feature. This new audio setting will allow players to turn off copyright protected music on the Rocket League Radio and Player Anthems, preventing streamers from landing in hot water online.

The setting will either replace DMCA-protected music with tracks that are free-to-use or mute the track altogether. This pre-emptive setting is being added to games more and more these days, and it’ll be a welcome addition to Rocket League when Season 4 drops on August 11.

As for what else is joining the game later this week, there’s lots. Outlaw, a vehicle that’s set to become one of the best Rocket League cars joins the game as part of the new Rocket Pass, along with a new arena called Deadeye Canyon.

As well as taking part in the latest season of Rocket League ranks, which has new undersized party rank restrictions, players will be able to take part in three new limited-time modes, 2v2 Heatseeker, Spring Loaded, and Speed Demon.

Casual modes will also be made… well, less casual. Players who continuously leave more than one casual match per day will be hit with bans and a concede option will be added.

You can check out the full patch notes here.