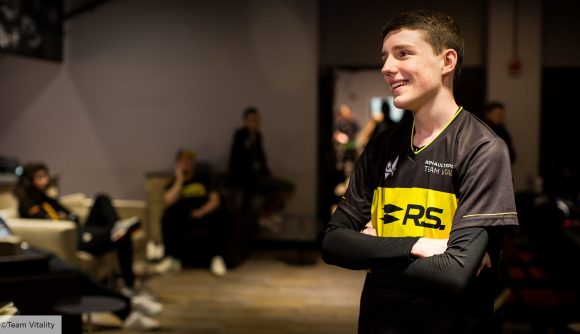 Kyle ‘Scrub Killa’ Robertson has claimed that he is now a free agent after his contract with Team Vitality expired on January 1.

16-year-old Scrub Killa, who was part of the Vitality side that became Rocket League Championship Series Season 7 champions and Season 8 runners-up in 2019, revealed during a livestream that he was a free agent but also suggests he has a new team lined up after saying he’s “already got one” when asked by a viewer if he’d find somewhere before the RLCS Season 9 deadline. Vitality are yet to officially confirm Scrub Killa’s departure but have been approached for comment by The Loadout.

During the stream, there were a couple of hints as to where the Season 7 champion could be heading. Despite claiming that he wasn’t keen on the idea of moving to America to compete, the Scot can be seen using a car with an NRG skin. NRG beat Vitality in the RLCS Season 8 final and are current world champions. He is also playing 2v2 matches on stream with Emil ‘Fruity’ Moselund, who plays for another of Europe’s main Rocket League organisations, Team Reciprocity.

Scrub Killa also claims that even if Vitality had managed to beat NRG in the Season 8 final and become back-to-back champions, he would still have left the organisation.

“Even if we won the World Championship it wouldn;t have mattered,” he says. “Even if we beat NRG and got the two-time. I know that’s probably surprising to hear. It’s also quite surprising for me here, but it’s fine.”

Scrub Killa’s announcement was certainly a surprise, considering the amount of success the youngster has achieved with Vitality in such a short space of time. His next move could cause massive waves in European and potentially North American Rocket League.