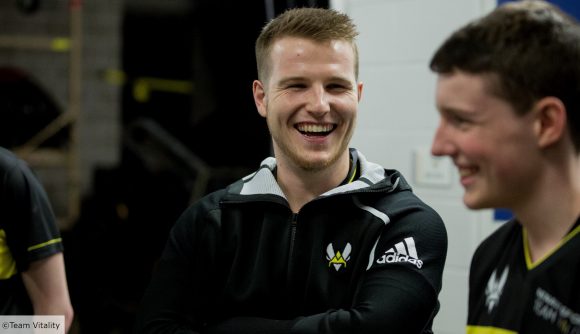 The coach of the current Rocket League world champions believes that franchising could be on the horizon and that, if it were to be introduced, it would lead to a more professional and competitive Rocket League esports scene.

Mike ‘Gregan’ Ellis, who is the head coach of the Team Vitality team that lifted the RLCS Season 7 trophy this summer, believes that franchising is “needed” in Rocket League so that the standard of competition can remain as high as possible. While it is not a certainty that Rocket League will become franchised, there have certainly been steps towards it. Next year’s Rocket League Championship Series leagues will see team numbers increase from eight to ten, and in an interview with Esports Observer Psyonix’s Jeff Dunham confirmed that franchising is something that is being internally discussed.

On asking Gregan about the prospect of franchising at the launch of Vitality’s V.Hive facility, he told The Loadout that he believes a “semi-franchise system” would be the most likely route but concedes that franchising is “needed” in competitive Rocket League.

“I think they [Psyonix] are definitely thinking about franchising, but it’s a tough decision to make,” he says. “I think they might go for something similar to football where you’ve got a ‘semi-franchise’ system where there are rules in place but players still have a significant hold in a spot.”

“I think it’s needed because Rocket League is struggling with talent sticking around too long with the ‘two out of three’ rule,” he added, referring to the rule that states two players from a previous RLCS season must play in four games of the current RLCS season. “Teams are having to stick with players that they might not want whereas a franchise would allow the best of the best to be selected and put to the top.”

Gregan believes that the increased professionalism that franchising would bring is especially important with Rocket League being thrust under the spotlight next year when it features alongside Street Fighter V at the Intel World Open, the esports event partnered with the Tokyo 2020 Olympics.

However, he thinks that Rocket League is the perfect esport for an Olympic audience.

“It’s so easy to understand,” he says. “It’s non-violent, it’s skilful, and it’s a team-based game so you get to see real teamwork. It is going to be used as that ‘bridge’ esport, but development needs to happen on Psyonix’s side to speed up the professionalisation of the scene. It will eventually get there.”

You can also read The Loadout’s extended interview with Gregan and Team Vitality player Kyle ‘Scrub Killa’ Robertson, which touches on the team’s success and what they’d both change about Rocket League.