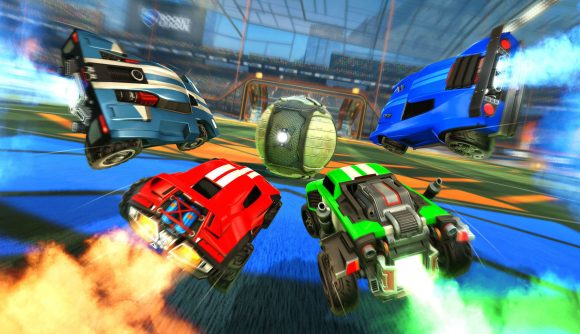 Rocket League has just turned five, hip-hip-hurray. Those years have flown by and lots of game-changing developments have happened, but the game’s audience has continued to grow and impress. For the vehicular football game’s birthday, Psyonix has released some of the amazing statistics achieved in its time.

Rocket League launched on July 7, 2015, on PC and PlayStation 4 with a release for Xbox One in February 2016 and launch on Nintendo Switch in November 2017. Over these four platforms, the game has amassed a mammoth total of 75 million players – that’s bigger than the population of New Zealand and Thailand combined.

Some other fun facts that the infographic includes some of the most popular items and aesthetics equipped by players in the last year. These include the Dueling Dragons, the ‘deal with it’ meme pixel glasses, and Fennec car body.

In the last year the most popular Rocket Pass item or car is the beautiful Ronin GXT and the most popular limited time mode was Heatseeker. In terms of Rocket Pass Premium, players unlocked 479,484,357 tiers in total (that’s one million for each person in Malta at least).

At the very least Rocket League deserves a pat on the back (or maybe on its hood) for five years of success and hopefully many more for it and Psyonix. If you’re not one of the 75 million players then here, we can teach you all about how Rocket League works.