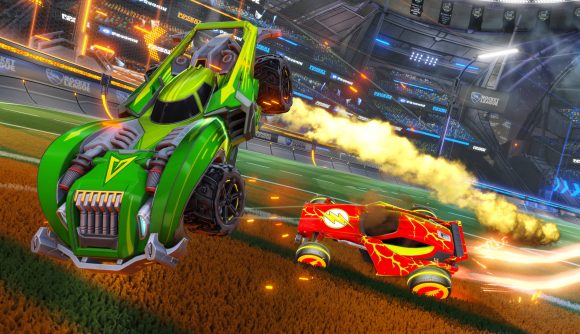 Whiffing kick-offs, scoring own goals, and going AFK are all actions you’d normally associate with toxic teammates in standard competitive Rocket League. But after a thorough investigation, Psyonix has banned two professional esports players for a year after they flouted the rules, and threw a match against an opponent in the LPL Pro Rocket League Oceanic Championship.

“After a thorough investigation, we have determined that Oceanic RLCS players delusioN and Frenzyy (formerly of Team Esper) deliberately compromised competitive integrity in order to lose game five of their team’s series against Team Fury,” the ruling reads. “Additionally, we have determined based on current supporting information, that Team Esper’s third Player, SSteve, did not intentionally compromise competitive integrity and will not be subject to disciplinary action.”

It’s worth saying that this wasn’t just any game either – its results had serious implications on the playoffs for the league. If Esper won the series 3-0 or 3-1, they’d go into the playoffs, but, if Esper won 3-2, Renegades would take their slot and progress to the top four.

So when the series went 2-2, Esper lost their chances to go to the playoffs, and things got weird. In the first kick off of the game, both Esper players missed the ball altogether, gifting Fury a goal. This is, sadly where it all started.

The pair have been handed a year long ban, meaning they can’t play in any Psyonix or LPL-sponsored events, and they’ll have to forfeit their winnings from the tournament too.