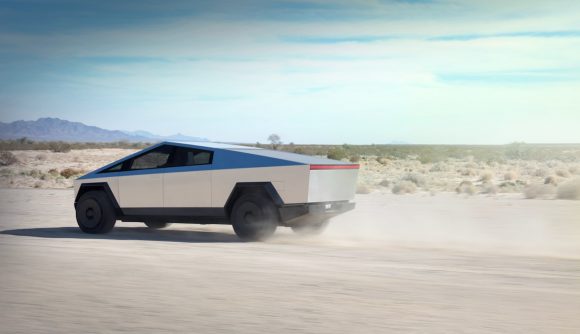 Can you believe it’s only been a week since Elon Musk unveiled the Cybertruck to the world? Well since then, the futuristic electric car, which looks like it’s been plucked straight out of a videogame, has been modded into lots of different games including Rocket League and Grand Theft Auto V.

However, one super fan wants to go one step further than a mod, and has set up a petition asking Musk to work with Psyonix Studios on getting the car added to the game. So far nearly 3,000 have signed Nikki Luzader’s petition.

“Our great and generous Elon Musk has bestowed upon us a revolutionary vehicle whose beauty, power, and elegance is unsurpassed,” the petition states. “Now my fellow gamers, we must fight for what is most undoubtedly meant for us to play with, because lets face it, most of us will never be able to afford one.

Although a mod already exists for the Cybertruck, it’s unlikely anything will come of the petition, even if it has captured the attention of Reddit.

If for whatever mad reason an official license does happen though, we want to see some sort of broken glass decal so we can always remember the car’s incredible reveal.