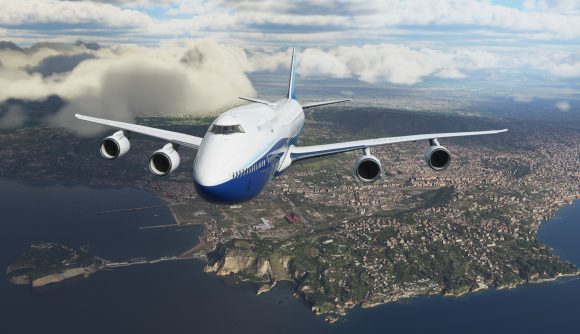 When Rami Ismail, the Game Dev World editor, began streaming yesterday, he could not of imagined what would happen next. Sharing the story on Twitter, Ismail described the chaotic series of events which followed his takeoff and ended in his plane flying blind as he waited for a locksmith.

In his Twitch chat, Ismail first told viewers “the bad news is there’s no pilot,” before adding “the good news is the guy who’s going to drill through my front door will be here in the hour”. The only explanation offered was that “I started the stream and locked myself out of the house”, as one of his viewers quipped “no wonder the price for this plane ticket was so good.”

Microsoft Flight Simulator, the new realistic flying experience, continued to play without influence from Ismail, sauntering through the skies without a care in the world or a pilot in the cockpit. Ismail, meanwhile, could only watch on helpless as his plane soared without him.

As anyone who’s ever tried to order a tradesperson at short notice might have guessed though, things didn’t go so simply. Ismail’s first locksmith cancelled, leaving Ismail to find another one post-haste. By this point, he was sharing pictures of himself waiting in his hallway, and with his hand pressed against the window, reaching out for his plane.

Eventually, the second locksmith arrived and Ismail was able to retake control of his plane as it was veering helplessly across the ocean. He was able to land the plane, though he admits “saying landing is gracious, but the airplane maintained structural integrity.”

At least it wasn’t a real plane. There’s a lesson here; don’t lock yourself out of your house while you’re streaming. Now you know.