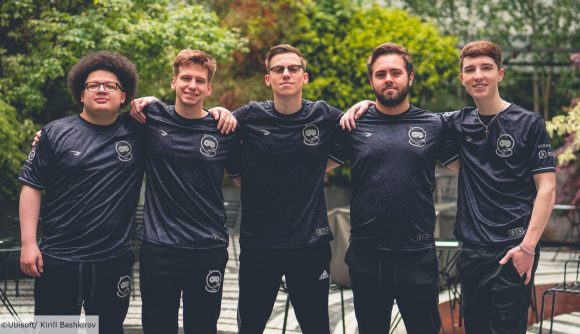 There have been two massive upsets during day two of the 2021 Six Invitational Playoffs, whereby both a former champion and the reigning champion have been eliminated from the competition.

The current holders of the iconic sledgehammer trophy Spacestation Gaming and 2019 champion G2 Esports were both sent crashing out of the tournament within an hour of each other, meaning that the winner of the 2021 Six Invitational is guaranteed to be a brand new name.

With both teams starting the Playoffs in the losers bracket, there was very little room for error. However, G2 were the first of the two Rainbow Six Siege giants to fall after going down 2-0 to North American team Parabellum. While this was G2’s first Six Invitational without its talismanic Dane Niclas ‘Pengu’ Mouritzen, many were surprised to see the European side struggle in the group stage. The shaky form has now been capitalised on by Parabellum, with the mainly Canadian roster kicking off

Almost an hour after this shock exit, Rainbow Six fans were in for another surprise as Spacestation Gaming were knocked out by Brazil’s Team oNe. The 2-1 defeat signals the end of both Spacestation’s defence of its title and the professional career of one of the greatest Siege players of all time, Troy ‘Canadian’ Jaroslawski.

While Canadian officially retired in March, passport issues with Spacestation’s Luke ‘Luke’ Slota saw the veteran player drafted back in for one last hurrah. With Spacestation’s elimination definitely signalling the end of his pro career, Canadian shared an emotional message reflecting on his time in Siege esports.

With Spacestation and G2 out of the picture, we are guaranteed a brand new Six Invitational champion, and seeing as MiBR, Ninjas in Pyjamas, Team Liquid, FaZe Clan, Team oNe, and FURIA are all still in contention, the odds are generously stacked towards a Brazilian team lifting the sledgehammer trophy for the first time.