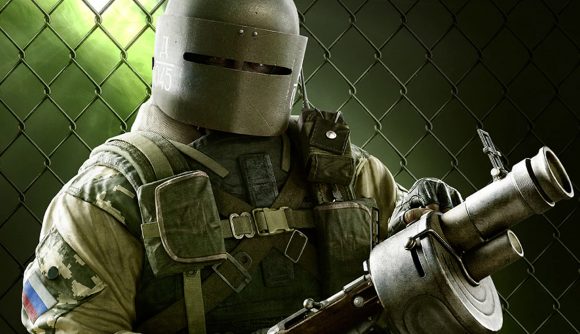 Tachanka, who is widely regarded as Rainbow Six Siege’s worst operator, is finally receiving a much-needed rework. The Tachanka rework will be live on Siege’s Test Servers today, though not everyone seems to be happy with the changes made to the Russian operator.

The updated Tachanka is still a low-speed, high-armour operator, except this time around he packs an incredible punch. His formerly useless turret-bound LMG now works as a primary weapon, giving the operator access to a powerful gun capable of ripping through hatches and walls. Tachanka is also equipped with a grenade launcher fitted with bouncing incendiary grenades – a single round from this weapon will stop enemies in their tracks. To top it off, Tachanka now shares Zofia’s Withstand ability, allowing him to self-revive when knocked down.

G2 Esports’ Niclas ‘Pengu’ Mouritzen has expressed his concern about the new and improved Tachanka on Twitter: “I think the part where he [Tachanka] just ran around and shot his gadget around like it was candy directly goes to show the fact that he has too many shells.” Pengu also doesn’t understand the developer’s decision to give Tachanka the self-reviving ability, asking if this was put in place as a joke.

The Withstand ability seems to be a big talking point among the competitive scene. Parker ‘Interro’ Mackay, a commentator for Rainbow Six Siege events, states that Withstand either needs to be given to every operator, or taken away from them all. “I’ve never liked Withstand,” says Interro. “It makes no sense for a select few operators to have a unique passive ability”. Fans have been quick to point out that the Withstand ability is rarely ever a factor in competitive games, let alone in the Rainbow Six Pro League.

Not everyone in the competitive scene reacted as passionately as Pengu. Team Vitality’s Fabian Hällsten focuses on the perks of Tachanka’s DP-27 LMG, “With the new Tachanka rework, I can now draw dicks on the walls at a speed never seen before.” Ubisoft clearly forgot to mention that added feature in the patch notes…

As with all Test Server updates, Tachanka’s balance changes will most likely be tweaked in order to tone down his power level. It’s highly unlikely Tachanka arrives on the official servers with ten incendiary grenades at his disposal.