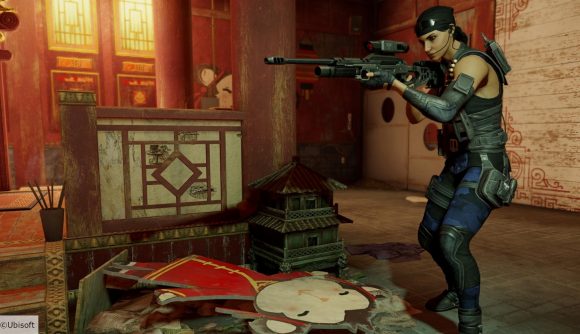 While new defensive operator Wamai and his magnetic gadget provide an interesting dynamic to tactical play, some players are concerned that the second new operator in Shifting Tides and her new weapon are far too overpowered. Kali, who is the new attacking operator, is equipped with Siege’s first proper bolt-action sniper rifle… And it’s a real heavy hitter.

The CSRX 300, which looks suspiciously like the AWP from CS:GO, is an instant kill with a headshot but also an instant down if a shot connects with an enemy torso. It can also rip through multiple breakable walls and can happily collat three or four players with one bullet. While the sniper in itself is strong, it is Kali’s gadget that is making her a super strong pick. She has an explosive underbarrel round on her rifle that can breach reinforced walls and take out enemy equipment that is on the other side of walls and barricades. She is, essentially, a wrecking ball with an immensely powerful sniper.

While the reasoning behind Kali is explained in this chat with one of the game’s designers over on PCGamesN, many pro players and members of the Siege community aren’t liking what the new operator brings to the game.

Spacestation’s Siege pro Troy ‘Canadian’ Jaroslawski said that Kali is “hands down the most ridiculous operator I have played,” mainly for the reason that her sniper rifle is far too strong.

Kali is hands down the most ridiculous operator I have played in Siege, only rivaled by Lion. The absolute DUMBEST gun ever that should not exist in this game and has insanely valuable utility.

Another pro player, Lauren ‘Goddess’ Williams of Susquehanna Soniqs, asked: “Who in their right mind thought Kali was okay? Do they NOT put ANY thought into how overpowered it will be?”

Lion wasn’t a good idea, we practically begged for him to be banned and we just had to suck it up till he was quarantined…

and now we have another game breaking OP? Who in their right mind thought Kali was okay? Do they NOT put ANY thought into how overpowered it will be?

However, G2’s Niclas ‘Pengu’ Mouritzen seemed excited to see the introduction of a sniper to Siege, especially after the change to bullet penetration that also came with the Shifting Tides update.

Bolt action sniper rifle got me EXCITED.
cant wait to see edited montages on youtube its gonna be sick.
On the other hand, HAND PENETRATION???? 😮
POG.

Kali has become the game’s first proper hard-hitting sniper and can carve through maps with relative ease, but it seems some really aren’t happy with just how strong an operator she is.

However, even if Kali is a tad on the overpowered side, there could at least be some tasty Siege sniping montages in the works now.