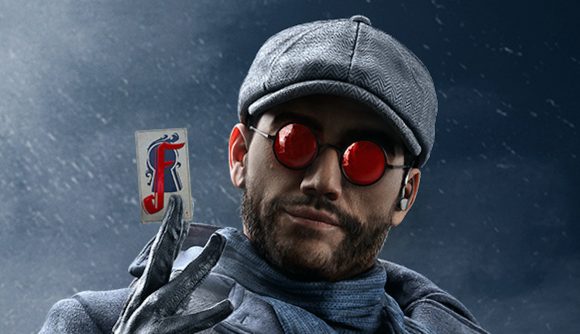 The Rainbow Six Siege reveal for Operation Crimson Heist is now over and in between lots of exciting news about Rainbow Six Siege’s streaming mode and plans for the future of the game, we’ve finally got our first proper look at new Argentinian operator, Flores.

Ubisoft has teased the cunning two-speed, two armour attacker for the last week or so now, but, as customary with seasonal reveals, the full picture was held back. But now, it’s finally been confirmed: Flores is the operator who’s managed to strap a timed explosive device to a drone.

It’s a gadget that’s been talked about for a long time in the Siege community, but it’s got a few unusual features. Before we get into that though, let’s talk about Flores’ background. Flores hails from the criminal underworld in Buenos Aires, Argentina, where he worked to pay for his mother’s medical bills. Although he went on to study engineering at university, he struggled with authority, and went back to his roots – except this time he stole from the rich. Shortly after that, Flores was recruited for the Siege team where his explosive gadget and powerful loadout certainly comes in useful.

That’s because this medium speed, medium armour attacker comes armed with either the AR33 assault rifle or the SR-25 marksman rifle. He also boasts a GSH-18 in his secondary slot and three RCE Ratero drones.

But what makes his drones stand out? Well, for one, they certainly pack a punch. Unlike standard drones, the RCE Rateros can only be driven forward and once the fuse is triggered – or the drone is shot at – it anchors itself to the closest wall, floor, or object and becomes bulletproof. It’ll then explode after three seconds.

Since the drones can anchor themselves on walls and objects, they’re great for destroying enemy defence mechanisms, like Bandit batteries and shields. They can also be used as a soft breach and for area denial too.

However, operating a RCE Ratero leaves Flores incredibly vulnerable, so make sure you’ve got someone (or a claymore) covering your back while you drone.

If you can’t wait to try Flores in your next Rainbow Six Siege ranked match, but you’re not sure when he goes live, make sure you check out our Operation Crimson Heist release date guide.