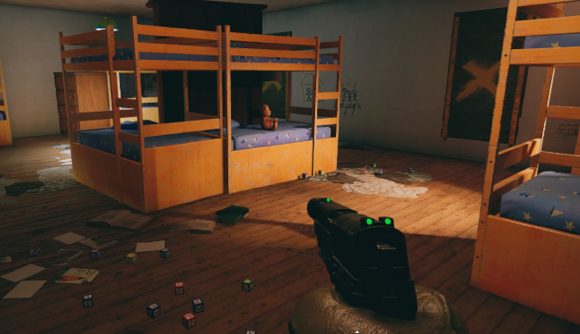 Rainbow Six Siege caster Parker ‘Interro’ Mackay has called for the Kids Dormitory location on the map Oregon to be renamed because it often leads to uncomfortable commentary during games. The bombsite is often colloquially shortened to “Dorms”, but this can be confusing when the area is referred to by different names by different players and casters.

“As a caster, the word ‘kids’ sounds awful when said alongside other callouts,” explains Interro in a tweet, “leading to awkward and inappropriate phrasing.” He says he is fed up of having to navigate around awkward and “horrible phrasing” while in the heat of casting a match. As one of the biggest esports games, Siege tournaments are broadcast across the world and a change could aid both casters and players.

Interro says that consistency is key to help newer players. “Standardizing callouts helps everyone,” he explains. “There really shouldn’t be multiple names for the same room. It gets confusing. Consistency is really important, especially for newer viewers.” He says that the location needs to be renamed in-game to ease confusion and to make sure that callouts are standardised across players, casters, and fans.

You can read the full thread here, in which Interro eloquently states his case that there are too many pitfalls surrounding the name in the context of shooting and fighting:

This is a serious request, by the way. Having to consciously navigate a minefield of horrible phrasing all because the word "kids" is involved really sucks. Changing the name of the bombsite would make our jobs easier.

G2’s pro Siege player Niclas ‘Pengu’ Mouritzen agrees with him, saying “It’s fucking rough. Even as a player it just feels wrong.” He also acknowledges that ‘bunks’ would be a better universal callout for the bombsite. Geo ‘Geo’ Collins also agrees, saying “‘He’s entering kids’ is just the worst sentence to say on broadcast.”

Despite some fans wanting the old name to remain in place on the Oregon map, a Ubisoft dev known as ‘Seb2’ replied to Interro’s tweet, saying that he agreed with the sentiment. Perhaps this means we could see some in-game changes soon.