The first Six Invitational, the now-annual celebration of angry men and women with guns trying to assault an objective, and those that love to stop them, was a smaller affair in 2017 compared to the pomp we often get accompanying a Rainbow Six Siege tournament.

Only six teams were competing in both the PC and the Xbox One competitions, while the Xbox One was considered to be the primary platform. The press room was permanently locked from the outside, hidden away up several staircases, with no screens showing the matches.

Ubisoft, the company founded by the five Guillemot brothers and churning out video games since 1986’s Zombi, understood a lot about how to make a decent game, but they had much more to learn about putting together a top-tier esports event.

I watched Continuum win the first PC finals, before Elevate won the Xbox One tournament, barely moving from a beanbag outside of the crowded room, rapt. I’d been playing Siege since its muted release back in December 2015, but this was the first time that I’d ever seen Siege’s top-level competitive play, and I was hooked.

Rainbow Six Siege, as an esport, was different from anything I’d seen before. Shooters like Counter-Strike: Global Offensive offer a selection of unchanging maps and in-game characters that have no personality or role, with a minimal amount of verticality. Victory in CS:GO — to an outsider like me — felt like it came from precisely rehearsed flash-bang spots, superhuman AWP reflexes, and controlled aggression. I loved this, but as a life-long sports fan, wished that there was a bit more structure. 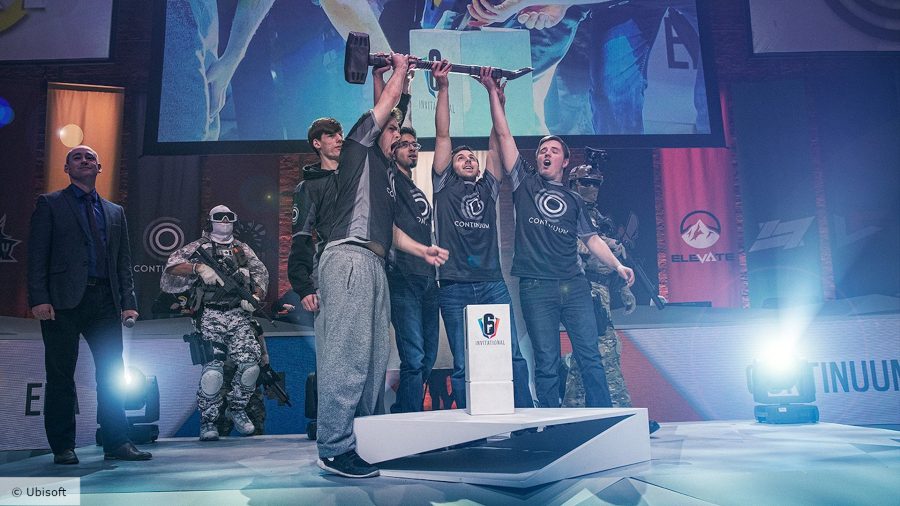 Meanwhile, RTS games felt like an impossible series of rehearsed builds orders and MOBA titles like League of Legends or Dota 2 had rigidly defined roles and abilities for the characters within it, in addition to the drafting phase, which let you watch plans come together in real-time. But they didn’t quite scratch the itch for FPS heroics that I’ve had ever since I watched friends battering each other on split-screen Halo.

Rainbow Six Siege felt like a remix of both games: MOBA-esque operators and defined roles joined twitch shooting, superhuman reflexes and constant controlled aggression, but with its maps, which were destructible and allowed a lot of left field plays and verticality, Siege added its own special sauce to the esports mix.

Before 2017’s tournament, the scene was largely ad-hoc, spun together out of enthusiastic players recognising the competitive potential of a game that many had overlooked in the first few months.

Related: The biggest esports games of 2019

Gabriel ‘LaXInG’ Mirelez played on the 2017 Invitational-winning Xbox One side Elevate, and transitioned to PC play when the Xbox One was phased out of official competition. His transition has been one of the smoothest in Siege history, with a win with Cloud9 at Dreamhack Montreal in 2018, and several other 3-4 place finishes, including Team Reciprocity’s recent loss at the hands of eventual Pro League finals champions, Natus Vincere, in Tokoname this month.

LaXInG mentions there wasn’t an announced pro scene with the game when it launched, and instead, a small community formed around GameBattles, a platform owned by MLG that offers ladders and tournaments for a variety of different games from amateur to pro levels.

“I got heavily into playing on GameBattles, and through that, I met a lot of the old Rainbow Six Vegas pros, who had returned to the scene with Siege,” adds LaXInG. “I’d never heard of them.”

As soon as I saw people cheering me on after a play, I was feeding off it and using it for my advantage

It wasn’t really his fault either. Tom Clancy’s Rainbow Six Vegas 2 was released back in 2008 and was old news when Siege released in 2015. He hadn’t played a game in the Tom Clancy franchise before, and instead had cut his teeth elsewhere. “I tried becoming semi-pro or pro in Halo but it was pretty dominated, and I was super young,” says LaXInG. “I definitely had the drive. As soon as I found out people could be pro players for a living, I realised I wanted to become a pro. Siege came along and gave me that outlet.”

In these early days, LaXInG says there was a slow but constant shift towards a scene that was more organised and more methodical as tactics were learnt and players started to learn from each other.

“I worked my way up through the GameBattles scene and made a name for myself,” he says. “Then I got noticed by some of the top teams at the time and got picked up. I kept climbing, and then Ubisoft swung in and announced an official Pro League and my team jumped right on it.” 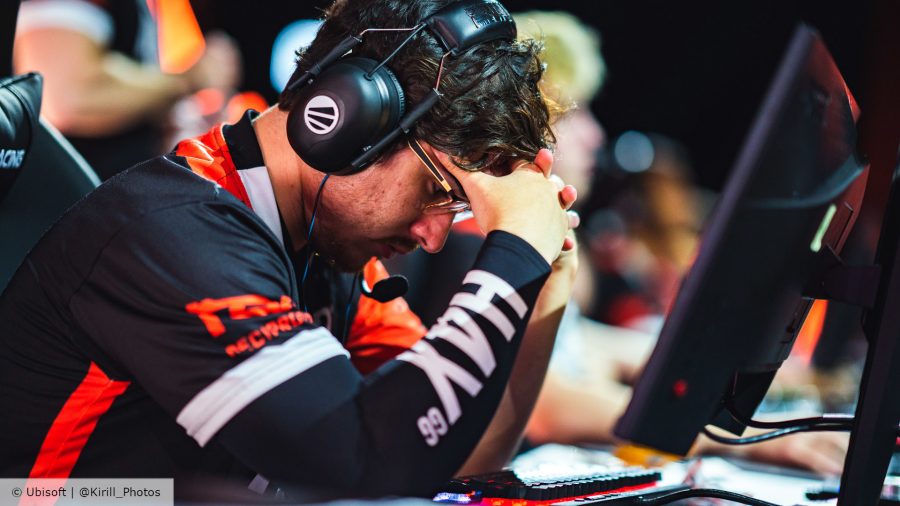 At this stage, although it was still centred on GameBattles, it was decentralised, with the power in the hands of the community. Ubisoft’s arrival with a Pro League meant more money, more exposure, and a defined structure for teams to thrive in.

“We lost,” LaXInG says. “We got to the quarter-finals, and if we had won the game we would have made it in. So we lost and like, tough s***, right? But then another team did make it and they wanted to pick me up, so I was in. I’ve been pro ever since.”

“The transition was fast. I flew out to PAX East [for the Season One finals in April 2016] and that was my first LAN event ever,” he adds. “We were playing in front of maybe 80 people. But as soon as I saw people cheering me on after a play, I was feeding off it and using it for my advantage. I loved it.”

From there, things just grew, leading to that first Invitational. After that, with Ubisoft clearly showing their intent to step up for the Rainbow Six Siege community, there was a big shuffle. The Xbox scene disintegrated and anyone that could transitioned to playing on mouse and keyboard. PC teams started to get bought up by big organisations. Continuum, the PC world champions, were picked up by Evil Geniuses. But they weren’t the only ones – Rogue, Natus Vincere, Cloud 9, and more all joined the Siege bandwagon, picking up teams who have all had reasonable success.

At the same time, Ubisoft was clearly communicating a plan to add more and more content to the game. With the exception of Operation Health in 2017, the game since launch, has maintained a cadence of two new Operators and a new map or map rework with each content drop.

Read more: Who is Shroud?

The Pro League’s first year only had divisions for Europe and North America, excluding a significant chunk of the world. But the game was successful in a variety of different markets, and so to serve them, both Latin America and the Asia Pacific region slid into the Pro League with their own local leagues. Events started to pop up globally, not just in North America, but European esports hubs Cologne and Katowice, in addition to locations like Sao Paulo, Milan and Rio De Janeiro, drawing crowds around the world.

It was clear that there was an enthusiastic audience for the game, but the real question was how to make it sustainable: how to make it financially viable for teams to hire coaches, pay their rosters, and set up things like boot camp facilities. 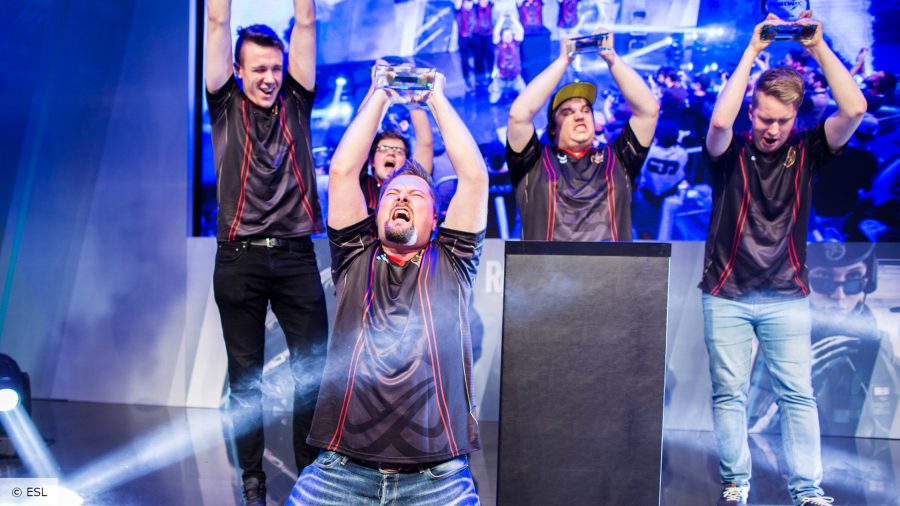 None of this is cheap, and offering a sustainable environment for big organisations is how games can grow their esports communities.

This sustainability increase is two-fold. Prize pools for the events started to increase, but Ubisoft also started to work closely with key outfits in the Rainbow Six Siege scene, getting them involved with a pilot program, which saw the most popular teams getting revenue from Ubisoft from team-branded weapon skins and cosmetics, but also a slice of the pie from Pro League bundles.

Currently, 30% of all net revenue goes back to teams. The pilot program bundles pay out the full whack to the team’s cosmetic that is bought, while Pro League bundles cough up nine percent into the prize pool for the next final, and the remaining 21% is spread across all pilot program teams equally.

Alongside this, prize pools started to increase. They rocketed from $50,000 for that initial PAX East event in Boston to $628,000 at this November’s Tokoname event. Part of this represented Ubisoft’s increased investment, but it was also down to sales of the Pro League bundles. Now, players and teams could both get a decent injection of cash, even if they don’t claim the win. Popular organisations could even make a decent chunk of cash from the get-go if their eager fans wanted to pledge their allegiance from repping skins in game.

If you’re not into esports, buying cosmetics for your favourite esports team is like buying a football shirt for the club you’re following. It’s a way to show where your loyalties lie and broadcast it to anyone you play with. Getting the final kill with Jackal’s C7E and forcing everyone to watch the replay is nice, but getting the final kill with a Nora Rengu-branded C7E: it’s a nice way to show the lobby about the team you love without spamming the chat with all caps shouting about the recent Pro League matches.

These procedures have come into place, slowly, as the Pro League cycle has repeated itself over time. Seasons have become longer: while they were at first tethered to the seasons in the game, now the Pro League seasons last six months each. While many esports games have organically grown, Siege is one of the first that has evolved under the constant scrutiny of The Internet. 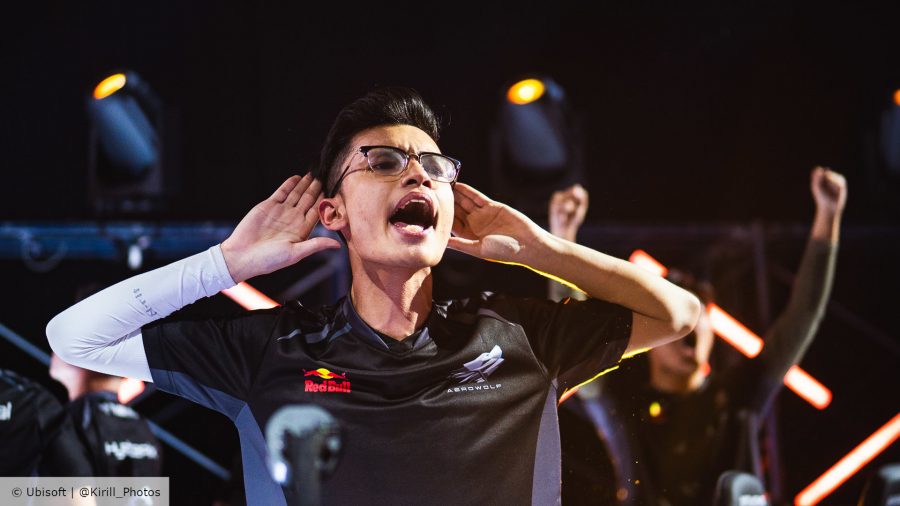 Counter-Strike and Call of Duty grew in a time before live streaming and near-daily video uploads. It’s given them the feeling of being omnipresent: the monolithic games have always been here, a constant presence. I first remember playing Counter-Strike on a 56k modem, shooting as much about guessing where latency will put enemies and trying to find decent competition outside of LAN events. But watching Rainbow Six Siege grow is a new way of watching how great esports come into being. Problems with balancing issues, weird bugs and in a few cases, broken maps, have been and gone over time, and we’ve watched it all play out. Who can forget the dark ages of Glaz dominating the meta, or the unfortunate tale of Lion completely breaking the game, or even the pawn rotation bug that saw characters sometimes facing a different direction to how they looked.

Tokoname, 4,000 fans sat in a room whooping and cheering for their favourite teams, was another glittering success story for the little esport that could. Next, the community turns its eyes to the yearly iteration of the Siege Invitational in Montreal, where the team will confirm plans for the fifth year of content, and kick off another year of esports.

Game director Alexandre Remy has gone on record several times to talk about how Siege isn’t planned to be a franchise of its own, and there are no sequels planned. Ten years of content and 100 operators was the original plan, but if the game has the same sort of runaway success as other esports, there’s no reason Siege couldn’t find itself as one of the esports greats, with a life far outstripping that of the series predecessors.

And with it boasting 55 million players, it’s already one of the biggest games in Ubisoft’s stable. With quarterly season updates, and a commitment to the competitive scene, it looks like Siege, and its burgeoning esports scene, is going to be around for a while yet.