There are very few games releasing this year that have split opinion quite like Rainbow Six Extraction. The co-op, PvE experience takes the tactical elements of Rainbow Six Siege and throws it into a progressively difficult arena where you’re taking on an alien force known as Archaeans, rather than other operators.

Some are excited to have a PvE Rainbow Six experience, while some worry that Extraction will get swamped in a year where co-op titles appear to be making a strong resurgence. So how will it stand out from the crowd? Game director, Patrik Méthé, says that Extraction’s gameplay will offer something “unique” for the genre, and that this will set it apart from some of the other highly-anticipated co-op titles dropping in 2021.

“Our main focus from the inception of the game was to create a different kind of co-op shooter,” he says. “There are a bunch of games in the genre that are very fun, as they allow the player to mindlessly mow down hundreds of enemies per session. On our side, since we are in the Rainbow Six universe, it was critical that our game rewarded tactical play, as a means to be successful. If you go in guns blazing, you won’t have a lot of success, especially on higher difficulties.”

Méthé reveals that this approach boiled down to one mantra that had to be followed closely throughout the development of Extraction.

“One of our pillars during production was ‘Guns are not enough’,” he says. “It means that in order to be successful, you’ll have to do proper recon, identify the threats and the opportunities, communicate with your teammates, use the right gadgets at the right time and, most importantly, evaluate when it’s time to move forward and when it’s time to extract. 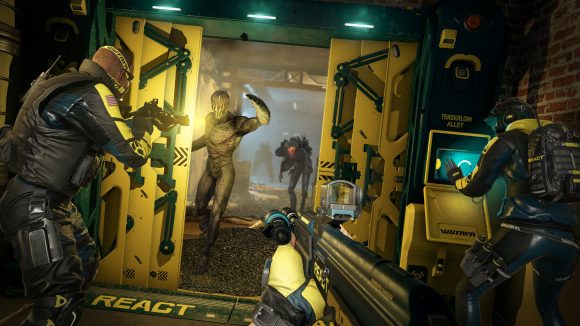 “These elements make the ‘moment to moment’ action in Extraction unique, especially within the PvE genre.”

While the Rainbow Six Extraction operators themselves are borrowed from its bigger brother Siege, it’s safe to say that Méthé is confident that bringing them into the PvE realm will create a gameplay experience that stands out from the crowd.