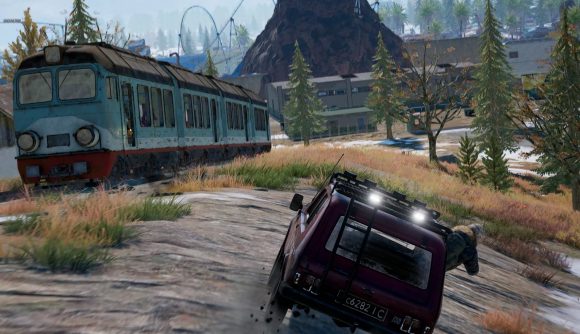 Vikendi will be making a triumphant return to PlayerUnknown’s Battlegrounds this week, but this time it’ll have less snow, moving trains, a bigger dinosaur theme park, and more. The game’s fourth map will be live on the test servers later this week for players to explore with content creators.

PUBG Corp has confirmed that the snow map will be live on the test servers on Thursday, March 6 from 11PM PST (2AM EST/7AM GMT, Friday March 7) until the same time on Sunday, March 8. The map’s return comes as part of a promotion with the the game’s chosen content creators, who will all host custom games for players to jump into this weekend.

Vikendi hasn’t been played since the end of January when PUBG Corp removed it to make way for Karakin, a new 2x2km close-quarters map set in Northern Africa. The developer hasn’t released a full set of patch notes yet detailing the changes to the snow map, but a recent leak of the partner announcement from China confirms we’ll see less snow, Apex Legends style moving trains, a bigger Dino Park, the return of Volnova, and more.

And what’s more, Hawkinz, one of PUBG’s community managers, has confirmed we won’t lose another map when Vikendi is added back to the lineup.

Your favorite PUBG Partners will have access to the updated Vikendi in custom games this weekend on the test server.

Test server will be up and running Thursday 11pm – Sunday 11pm PST.

Jump in and play, let us know your feedback before it goes live!https://t.co/lFo6oLjV0f

Of course, the test server version of the map is subject to changes, so if you want to help PUBG Corp shape the map for future release, tell them what you think before the test ends on Sunday.