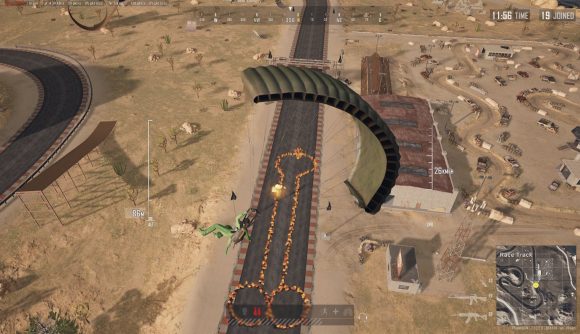 The new PlayerUnknown’s Battlegrounds update has only been on the test server for a few hours, but players have already worked out how to draw giant penises. Thanks to update 7.2, which allows players to get creative with flammable gas cans, players have been busy drawing some pretty big genitalia.

The update, which also brings the long-awaited ranked mode to the game for testing, made some changes to the way cans work. Players can set up traps for their enemies now by spilling gas deliberately on the floor and setting it alight by shooting the spillage or throwing a grenade at it. While this should be used to make bridge trolls and final circles even deadlier, players have opted to make flaming dicks as big as the eye can see.

Prominent PUBG and Valorant leaker PlayerIGN posted a picture of one of the said dicks on Twitter this morning and it’s pretty impressive. Given you only have about seven seconds worth of gas per can to draw shapes, someone has clearly gone to a lot of effort to make this masterpiece.

It looks like this one was created on the game’s training map, but I wouldn’t be surprised to see this sort of creativity in the normal mode.

While drawing flaming dicks isn’t exactly what PUBG Corp had in mind when it added the new gas can feature, it’s certainly provided us all with a good laugh.