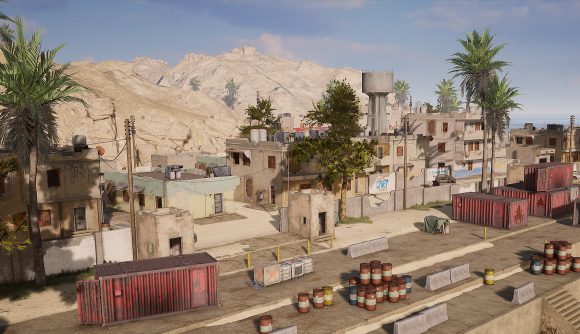 PUBG Season 6 is upon us, and the game’s newest map, Karakin, is unlike any players will have seen before. Not only is it tiny at just 2km by 2km, it introduces new mechanics into the game, which were teased by PUBG earlier this week and also predicted by leakers and dataminers.

Karakin, a tiny island off the coast of North Africa, is described by the game’s developers as “small, fast, and dangerous.” The map, which is available in test servers now, includes six main points of interest, including a ‘Cargo Ship’ and a number of small villages and compounds. This map, which will hold 64 players, is roughly half the size of the previous smallest map, Sanhok.

What is even more interesting about Karakin is PUBG’s focus on destroyable environments, similar to what you see in the likes of Rainbow Six Siege or Battlefield titles. A new feature, called ‘Black Zones’, sees random airstrikes – which are marked on the map by a purple circle and preceded by a siren – fall upon areas of the map. These random strikes have the ability to cause damage to buildings and structures and can cause anything between light damage or a complete levelling.

The environment can be further manipulated using ‘Breach Points,’ which are select walls and floors around the map which can be blown up using the newly introduced C4 explosives.

There will also be bullet penetration on Karakin, but only through the “weakest walls” on the map, according to the patch notes.

The new update also confirms that the new Survivor Pass for Season 6 will be called Shakedown, as was also predicted by leakers.

When Karakin enters the main map pool, it will temporarily replace Vikendi, although you can still play it in custom matches.