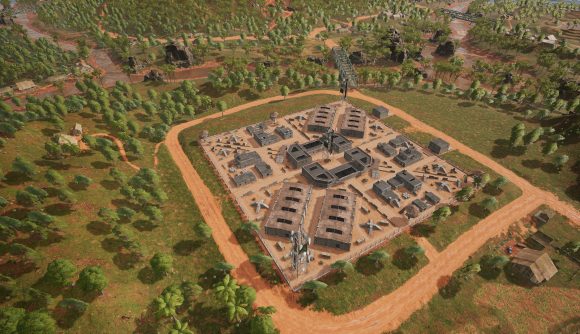 When Sanhok was released in June 2018, it divided people’s opinions. The map, which was the third to be added to PlayerUnknown’s Battlegrounds, was filled with lush, green, overgrowth that distanced itself from the close-quarters urban experience many PUBG players were used to. Well, more than two years – and many complaints later – PUBG Corp is preparing to release a new and improved Sanhok to the world.

Screenshots of Sanhok Mark II were shared on Twitter earlier today and shows Bootcamp’s new symmetrical layout and the Party Zone, which looks like it will replace the docklands. While we’ve only got a glimpse of two locations, it’s clear the development team have really worked through constructive criticism to improve gameplay all round.

In the Bootcamp image, you can see a new bridge has been added, linking one island to another, and the river has been made narrower. In addition, the cliffs which made some rotations in the late game near impossible have been replaced with low banks. There is quite a big space on the right though, which many think will be replaced by the old warehouses.

The Docklands has also been replaced by the Party Zone, which houses a number of different size buildings, including the BangBang Indoor Boat Storage and the Black Cat Club.

In the background, you can also see the mountain, which as WackyJacky101 points out in his video, has been replaced by quite an open compound devoid of trees and steep rock faces.

The last image, which looks like it feeds into the lore of the game, also gives us a hint at the new Ruins, and yes, it looks like that’s in for a dramatic rework too.

Given that previous season have had ties to existing maps, it might well be that Season 8 of PUBG, which is due sometime in the next few weeks, will be centred around Sanhok.