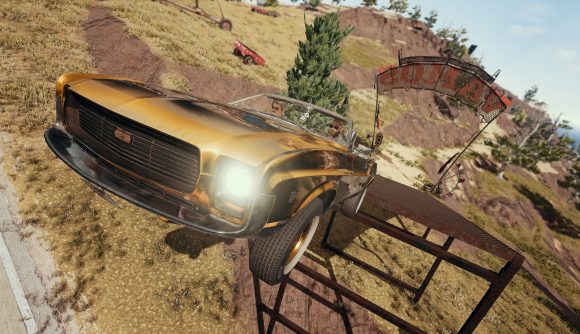 A new video explaining how Miramar came to be used as a deadly battleground in PlayerUnknown’s Battlegrounds has finally been unlocked by the game’s fans. Players have spent the last two months collecting DVD and CD fragments in the battle royale game to unlock a number of rewards tied to the Badlands Survivor Pass, including this cinematic trailer.

Eagle-eyed fans have collected more than 1,150,000,000 fragments so far after PUBG Corp reduced the milestone figures and yesterday (January 2), unlocked the last part of the Miramar lore video. It depicts an underhand deal orchestrated by a Russian oligarch, the first lone survivor of Erangel, who we last saw in the game’s Season 4 cinematic trailer.

In this video, which you can watch below, the owner of Miramar confronts another Mexican man, who apparently organises car races, about bids that have been placed on his territory by the man behind Erangel’s survival games. The tense confrontation is being transmitted to the mysterious Russian, and when Miramar’s owner refuses to budge, the Mexican double agent gets the green light to blow Hacienda del Patrón to high heaven.

So what does this all mean? Well, in terms of the game’s ever expanding lore, it suggests PlayerUnknown takes no prisoners when it comes to securing new battlegrounds for his games and that he had support from others to expand this to new territories.

But of course this doesn’t really add anything to the game for players to enjoy. Season 4, which focused on Erangel, brought a full map rework, new features, and new weapons. A series of tour guide videos were also uploaded, explaining the origins of some of the most popular spots of the map.

It’s unlikely we’ll see a full rework of Miramar given that we’re nearing the end of Season 5, but we have seen plenty of new additions in recent weeks from motor glider tests, new throwing mechanics, and more.

However, in an interview with PCGamesN last year, Brian Corrigan, PUBG Corp’s studio director, said they want to grow PUBG into “something much bigger than just the battle royale game.” And with PUBG Corp’s new studio, Striking Distance, led by Sledgehammer Games co-founder Glen Schofield, planning a “narrative experience in the PUBG universe,” this new cinematic has us hooked.