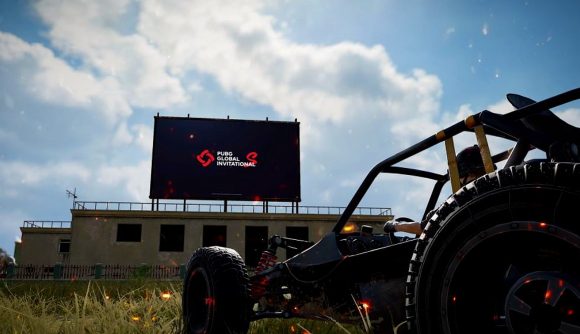 Following in the footsteps of its battle royale cousin Call of Duty: Warzone, PUBG is upping its efforts to promote its esports scene in-game. As part of Update 10.2, which introduces a new reputation system to stamp out toxicity, ten big screens are being added to popular maps Erangel and Miramar which will show livestreams of action from PUBG Global Invitational.S.

The tournament, which is based in the South Korean capital Seoul, is currently underway and features 32 teams from around the world such as Team Liquid, FaZe Clan, and T1. All the action will now be beamed to PUBG players in-game and in pre-game lobbies, and trailers will run when the stream is offline.

If you think you’ll be too distracted from fragging by the world’s best players, or just simply humiliated by the skill gap, then there will be an option to turn the livestreams off.

There’s a lot more PGI.S promo going on within PUBG aside from the big screens. Graffiti of the PGI.S logo has been plastered around Erangel and Miramar, and the starting plane will now tow a banner advertising the tournament.

With the 32 teams competing for a huge prize pool of $3.5 million, PUBG Corp will be wanting as many eyes on PGI.S as possible. In-game promotion of the event, especially at the time of a large new update, should hopefully attract some new viewers to the PUBG esports scene.