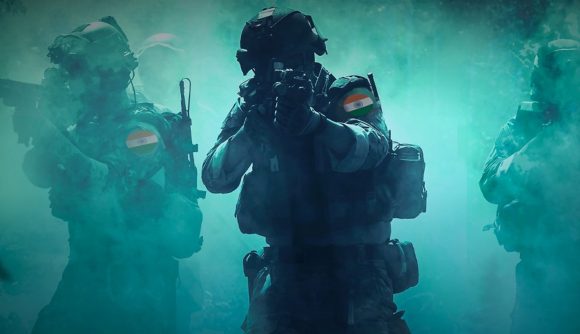 “FAU:G was always in the pipeline and we were preparing for an October release. The ban on PUBG Mobile was coincidental,” the studio’s founder Vishal Gondal tells The Indian Express. The game is one of three mobile games the studio will release in the next two months, with the other two being a cricket game and a rhythm game. However, it is FAU:G, looking so similar to PUBG and coming so soon after PUBG Mobile’s ban, which is garnering attention.

PUBG Mobile was not the only app banned by the Indian government. Arena of Valor, another one of the world’s biggest mobile esports, was also banned. In all, 118 apps were banned by the government because of links to China, with the main focus on properties developed by tech giants like Tencent.

The links to PUBG Mobile do not just stop with the styling or gameplay, however. The game takes place in the Galwan Valley, the site of a still-ongoing skirmish between Indian and Chinese forces. The Valley resides along the Himalayan border between India and China, and has seen at least 20 Indian casualties this year.

Using the site of a real, current battle between China and India could easily be read as FAU:G taking on PUGB Mobile head to head. With PUGB Mobile accounting for 22% of all app downloads in India last year and with India’s Prime Minister Modi saying last month he wants Indian devs to be “lead the international digital gaming sector,” FAU:G is clearly trying to tap into patriotism to be a truly Indian videogame.

In response to PM @narendramodi call of #AtmaNirbharApp, @nCore_games is proud to announce our action game Fearless And United: Guards FAU:G with mentorship from @akshaykumar 20% of net revenues donated to @BharatKeVeer trust for India's Bravehearts #JaiHind #FAUG #gaming pic.twitter.com/OZTKj2mdFl

This patriotism can further be gleaned from FAU:G’s plan for their revenue. As part of the game’s reveal, it was announced that 20% from each sale will be donated to an Indian military veteran charity. There is a huge gap in the Indian market with PUBG out of the way, and whether the timing was intentional or not, FAU:G seems perfectly positioned to take advantage.