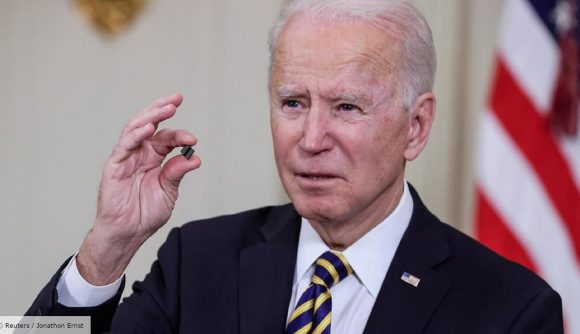 The President of the United States of America has ordered a review of the supply chains that are impacting PlayStation 5 and Xbox Series stock shortages. President Biden’s 100-day review will look into the supply chains for semiconductors, pharmaceuticals, large capacity batteries, and other industries.

The semiconductor chips are used in mobile phones, automobile and military technology, and next-gen consoles, and the shortage of them is widely regarded to be a major reason for the stock issues surrounding next-gen consoles.

The President addressed the supply issues at a press conference on February 24, during which he announced the signing of an executive order on securing vital supply chains. “It’s about resilience, identifying possible points of vulnerabilities in our supply chain and making sure we have the backup alternatives or workarounds in place,” he says. “Even small failures at one point in the supply chain can cause outsized impacts further up the chain.” He also emphasises that US-based supply chains need to be “secure and reliable.”

Sony fans all over the world have been unable to get their hands on the company’s next-gen console due to production issues and demand far exceeding supply.

Despite retailer Game telling The Loadout that it has “strong measures in place” to prevent scalpers from buying large quantities of consoles to resell at inflated prices, it is estimated that scalpers have made nearly $30 million of profit on next-gen consoles.

With Sony confirming the development of a new, next-gen VR headset for the PlayStation 5, it will hope that President Biden’s review of the semiconductor supply chain will mean that more players can get their hands on the latest consoles.