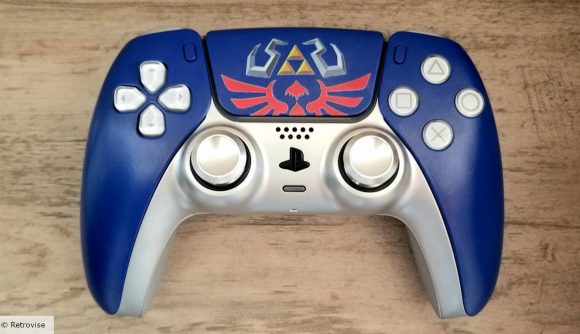 What feels wrong, but is so, so right? A Zelda inspired PlayStation 5 DualSense controller, of course. Well, one now exists thanks to a pretty nifty modder who’s made a name for themselves in Nintendo circles.

Redditor Retrovise is used to working with Nintendo systems, from the Game Boy Advance SP to the Nintendo Switch, so much so that he’s commissioned from time to time to mod other people’s systems. However, when he saw the DualSense controller for the first time, he knew he had to do something, so he ordered one there and then.

“I don’t make custom PlayStation controllers often, but I knew when the PS5 was announced that I wanted to tinker with one,” Retrovise tells The Loadout. “I ended up just buying the controller to ease that curiosity.” But when it came to ideas, the modder decided to settle on an old Nintendo classic – Zelda.

So after just a couple of weeks of work, painstaking painting, and UV printing, the Hylian DualSense controller was born.

[OoT] My PS5 Hylian Controller. More @retrovise on IG. Thanks! from r/zelda

Admitedly, it’s a crossover that we’re probably never going to see in the future, but if it’s piqued your interest, strap yourself in because Retrovise has more on the way.