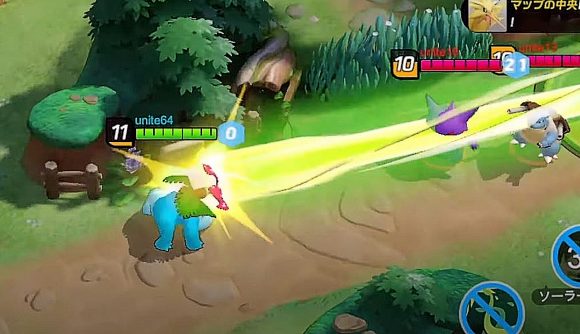 During June 24’s Pokémon Presents broadcast, a brand new surprise title was announced which sees the franchise move into the MOBA scene.

Pokémon Unite is a MOBA coming to mobile devices and Nintendo Switch, and sees 5v5 battles on a map that will look familiar to fans of Dota 2 or League of Legends. There are quite a few stark differences from most MOBAs though and some details about the game – which is being created by Chinese gaming giant Tencent’s TiMi Studios – are still a bit sketchy. However, here’s what we know so far.

Similarly to how LoL players pick champions, Pokémon Unite players will select a Pokémon to use in each game. Each has different pools of moves, similar to most Pokémon games, which are earned throughout the match by levelling up and evolving your Pokémon. The map is divided into two sides which each have five scoring zones for teams to bank points in. Points are racked up by defeating and catching wild Pokémon, which are similar to minions. Once you’ve got some points, you have to negotiate your way through the map to a scoring zone to deposit them. The highest scoring team is the winner.

Along the way though, you can obviously battle enemy players. As you level your Pokémon up, you get access to stronger moves and can build towards your ‘Unite Move’ – essentially, your ultimate.

As you can see from the below snippet of the Pokémon Presents stream, there’s a tonne of similarities with the likes of League of Legends and other mobile MOBAs, but also lots of new features in order to carry on many of the key aspects of Pokémon games, like catching and battling.

During Pokémon Presents, the producer of the game, Masaaki Hoshino, says: “The development concept behind Pokémon Unite was to create a cooperative Pokemon game that anyone could pick up and enjoy immediately but also has a lot of depth to be played over and over again. Tencent Games Timi Studios specialise in team-based battle games and we have fused that with Pokémon to create an all-new experience in Pokémon Unite.”

Pokémon Unite will also be cross-platform, meaning players on all mobile systems and Nintendo Switch can all play together. It is also billed as ‘free to start,’ suggesting it won’t be a completely free to play experience like a lot of MOBAs.

There is currently no release date for Pokémon Unite.

This is one of the last frontiers of gaming for the Pokémon franchise to cover, and with Tencent’s track record of making extremely popular mobile games and MOBAs with well supported esports scenes, Pokémon Unite has got potential to not only be a blast, but also a competitive title in the future.