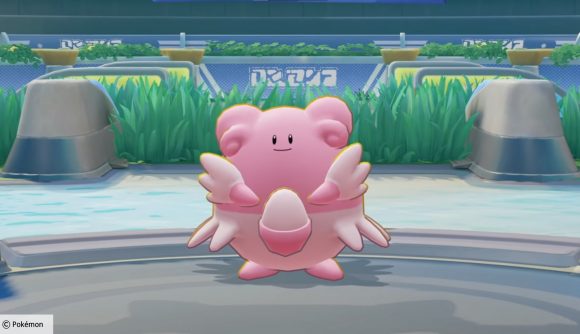 Pokémon Unite’s next roster addition has been announced, and it’s none other than the egg-slinging Blissey. While many expected the next Pokémon to find its way into Unite would be Blastoise, completing the trio of first generation starters alongside Charizard and Venusaur, Blissey instead gets its debut on August 18.

The official Pokémon Unite Twitter page describes Blissey as “an egg-cellent Supporter Pokémon with moves that heal or increase basic attack speed.” From the footage shown, we can see Blissey using what looks like Softboiled and Egg Bomb. This would align with a reported datamine posted on Reddit last month.

Blissey’s Unite Move is called Bliss Assistance, which “allows it to dash to an ally’s aid and protect that ally from attacks,” according to the announcement tweet. According to the datamine, the move sees Blissey jump towards an ally, shielding them and boosting both their attack and special attack. Blissey also takes some of the damage dealt to the ally Pokémon. If used on an enemy, Bliss Assistance knocks them back, though all of this is of course unconfirmed.

You can check out the announcement video for Blissey below.

Blissey is an egg-cellent Supporter Pokémon with moves that heal or increase basic attack speed! Its Unite Move, Bliss Assistance, allows it to dash to an ally’s aid and protect that ally from attacks.

Bring your allies happiness with Blissey, coming 8/18 to #PokemonUNITE! pic.twitter.com/gI1moTmoUM

With the ability to both heal and increase teammates’ DPS, Blissey could very well top our Pokémon Unite best Supporters list, knocking current top ‘mon Eldgegoss from its perch. However, we’ll just have to wait until August 18 to see how it fares in the arena.