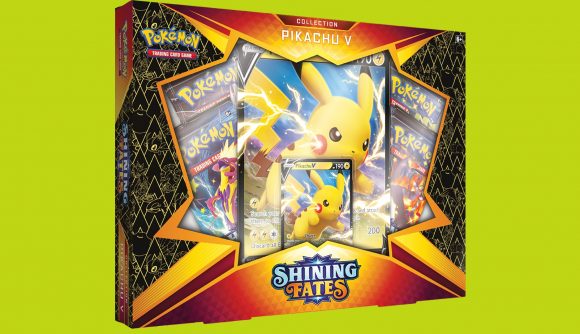 Pokémon TCG is getting a special expansion early next year that boasts over 100 shiny Pokémon, including nine shiny Pokémon V and seven shiny Pokémon VMAX. This includes the highly sought-after shiny Charizard in its towering Gigantamax form. The Shining Fates expansion is currently expected to start rolling out globally from February 19, 2021.

Shining Fates is said to be heavily inspired by last year’s popular Hidden Fates expansion, and you can expect it to introduce three more Amazing Pokémon, each of which features a Legendary or Mythical Pokémon illustrated over a rainbow background.

Pokémon unboxing streams continue to draw in huge viewer numbers over on Twitch, so today’s announcement is very welcome news indeed. The prices of rare and vintage Pokémon cards have taken off in recent months, to the point where a Shadowless Base Set Charizard Pokémon card recently sold at auction for $295,000.

As always with Pokémon TCG expansions, there will be a number of ways to start collecting cards from the Shining Fates set. Here’s what you get with each: