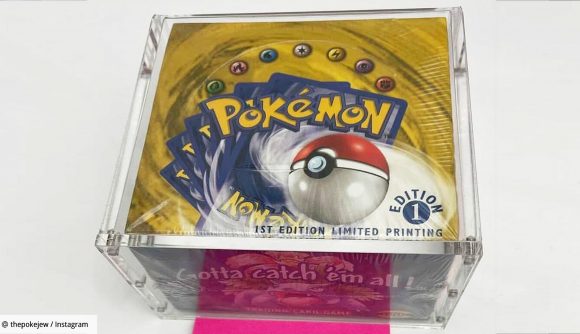 Pokémania has well and truly been running wild in the Pokémon trading card game community for some months now. Ever since the invasion of cash-flush influencers into the scene, including YouTube star Logan Paul and rapper Logic, the market has seen a huge uptick in demand for the already-popular TCG.

The game’s most sought after set, the 1999 Base Set, somehow still has mint, first edition (and even shadowless) boxes out there despite going out of print two decades ago. These boxes have been going for ludicrous sums of money – well into the hundreds of thousands of dollars – with the lure of pulling the iconic Charizard a huge selling point. Now, a new record has been set, with an eye-watering $450,000 exchanging hands in return for a 1st edition shadowless Base Set booster box.

Pokémon card broker to the stars, Michael ‘ThePokéJew’ Goldstein, yesterday took to Instagram to announce that he had facilitated the sale of the box to German Fortnite content creators ‘LoftyVTR’ and ‘Standart Skill’. According to ThePokéJew, “this is the single largest transaction for a sealed first edition Base Set booster box to date, shattering the previous record sale of $408,000.”

You can see the encased box in all its glory below.

With the imminent celebration of Pokémon’s 25th anniversary, Logan Paul will be taking one of these iconic boxes and cracking it open in a Pokémon Day box break on February 27. Whether or not LoftyVTR and Standart Skill choose to do something similar with their own box, or keep hold of it as an investment piece remains to be seen.