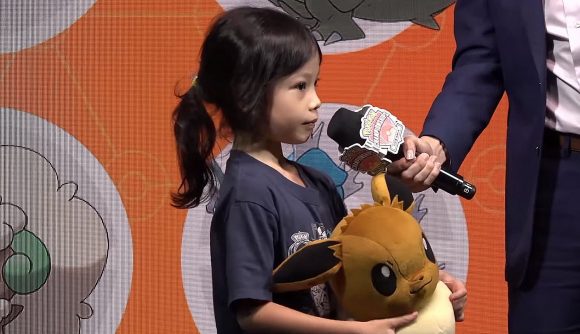 Junior competitions are the perfect place for the future stars of competitive Pokemon to make a name for themselves. But no one expected the Oceania International Junior Championship to be won by someone as junior as this.

Firm favourite for the junior crown, Justin Miranda-Radbord, was toppled in the grand final by a shock winner: seven-year-old Simone Lim from Singapore. The young trainer stole the show in what is her first competitive season in the Pokemon VGC, stomping to victory with her team of Rotom, Tyranitar, Excadrill, Gyarados, Whimsicott, and Butterfree.

As well as the young champion sending the audience wild with her performance after a massive play in the final move of the deciding match, she also went on to deliver possibly the cutest post-match interview in esports history. Clutching her Eevee plush doll, the quietly-spoken Lim talks about her match-winning move on her opponent’s Dusclops before thanking her friends and family.

The young champion – who has only been alive since the fifth generation of main series Pokemon games – certainly has a bright future ahead of her.

Lim’s victory in the Oceania tournament has earned her both a spot at the junior event at the World Championships in August and $1500 – a small fortune for a seven-year-old.